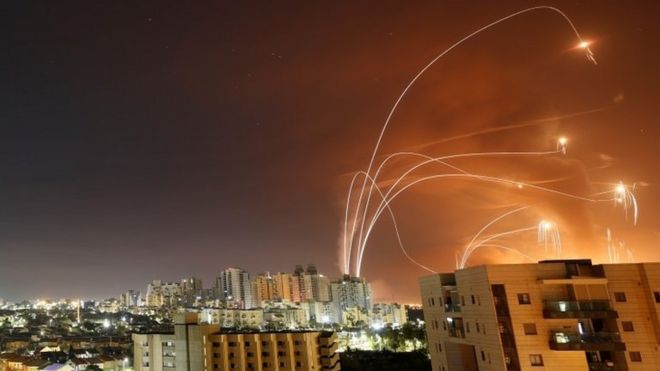 Conflict raged throughout Thursday as Palestinian militants fired rockets into Israel and the Israeli army maintained a barrage of air strikes.

More than 100 people have been killed in Gaza and seven have died in Israel.

Jewish and Israeli Arab mobs have also been fighting within Israel, prompting the president to warn of civil war.

Defence Minister Benny Gantz ordered a “massive reinforcement” of security forces to suppress the internal unrest, and more than 400 people were arrested.

Two infantry units and one armoured unit were positioned near the border with Gaza on Thursday. At least 7,000 army reservists have also been called up.

No decision has yet been made on whether to launch a ground operation. The Israeli army is expected to put forward plans for a possible offensive imminently, but it would need to be approved by army chiefs and various levels of government.

The four-days of violence in Gaza and Israel is the worst since 2014. It was initially fuelled by weeks of Israeli-Palestinian tension in East Jerusalem which led to clashes at a holy site revered by both Muslims and Jews. This spiralled into an incessant exchange of Palestinian rocket fire and Israeli airstrikes.

In other developments on Thursday:

According to the health ministry in Gaza, at least 103 people have been killed in the four-days of conflict. Officials in the territory, which is controlled by the Islamist militant group Hamas, many civilians have died including 27 children.

Israel says dozens of those killed in Gaza were militants, and that some of the deaths are from misfired rockets from Gaza.

In the Israeli city of Sderot, a young boy was killed when rocket fire from Gaza hit his home, and shrapnel penetrated the shelter he was hiding in.

Israel has also called up 10 reserve border patrol companies to help tackle the worst unrest between Arab and Jewish communities for many years. Political leaders have appealed for calm, and President Reuven Rivlin described the outbreaks of rioting in several towns and cities as “senseless civil war”.

There have been widespread calls for de-escalation, including from Israel’s ally the US, but little sign of the conflict easing.

A senior Hamas official said the group was ready for a “reciprocal” ceasefire if the international community pressures Israel to “suppress military actions” at the disputed Al-Aqsa Mosque in Jerusalem.

However, Israeli military spokesman Hilda Zilberman said Israel was not seeking a ceasefire at the current time, the Times of Israel reported.

What’s the feeling on the ground?

The fear among civilians on both sides is taking its toll.

Najwa Sheikh-Ahmad, a Gaza mother, said of Wednesday night: “You cannot sleep… In any moment your home might be your grave.

“You cannot be secure. As a mother it’s very terrifying, it’s very exhausting for my feelings, for my humanity,” she told the BBC’s Today programme.

In Israel, an apartment block was destroyed in the city of Petah Tikva shortly after residents had gone to their bomb shelters.

“We heard an alarm and suddenly there was a bang. Smoke entered the shelter, and the neighbour next to me who was sitting on a chair flew back,” one resident told the news website Ynet.

What caused the violence?

The fighting between Israel and Hamas was triggered by days of escalating clashes between Palestinians and Israeli police at a holy hilltop compound in East Jerusalem.

The site is revered by both Muslims, who call it the Haram al-Sharif (Noble Sanctuary), and Jews, for whom it is known as the Temple Mount. Hamas demanded Israel remove police from there and the nearby predominantly Arab district of Sheikh Jarrah, where Palestinian families face eviction by Jewish settlers. Hamas launched rockets when its ultimatum went unheeded.

Palestinian anger had already been stoked by weeks of rising tension in East Jerusalem, inflamed by a series of confrontations with police since the start of Ramadan in mid-April.

It was further fuelled by the threatened eviction of Palestinian families from their homes in East Jerusalem by Jewish settlers and Israel’s annual celebration of its capture of East Jerusalem in the 1967 Middle East war, known as Jerusalem Day.

The fate of the city, with its deep religious and national significance to both sides, lies at the heart of the decades-old Israel-Palestinian conflict. Israel in effect annexed East Jerusalem in 1980 and considers the entire city its capital, though this is not recognised by the vast majority of other countries.

Palestinians claim the eastern half of Jerusalem as the capital of a hoped-for state of their own.