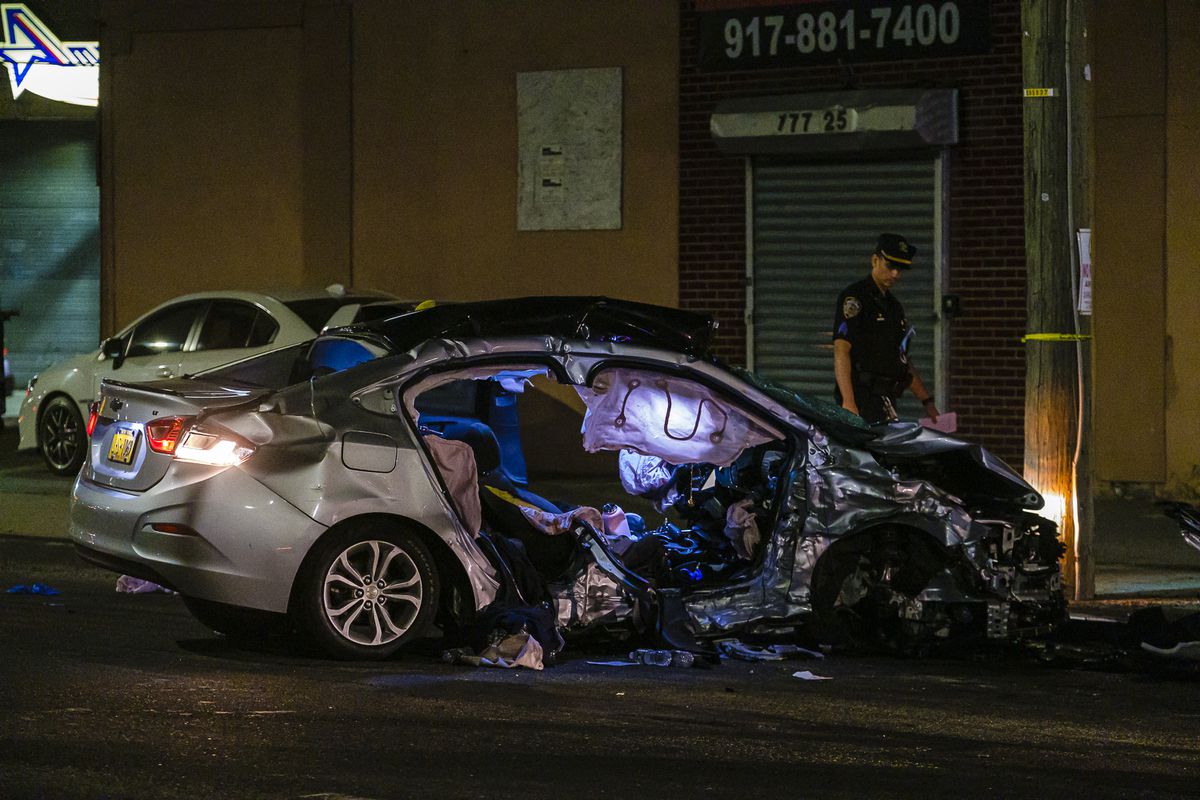 A man whose wife and daughter were killed by an alleged drunken driver in Queens was tracking his wife’s location with her phone — rushing to the horrific crash scene when it stopped moving.

Lorenzo Granobles called his cousin in a panic late Saturday after finding the Springfield Gardens wreck that claimed the life of his wife, Diana, and their beloved 10-year-old daughter, Isabella.

“When he realized that the phone was in one steady position for a long time he decided to walk toward her phone after his shift ended and ran into the scene,” his cousin and Isabella’s godfather, Javier Granobles, told the Daily News on Monday.

“He calls me telling me Diana and Bella got into an accident. I was trying to calm him down. He was hysterical,” the cousin said. “He had just run into the scene and didn’t know what he was running into, but as he got closer he realized one of the cars that was mangled was his own car.”

Diana Granobles, 31, was with her daughter, on her way to pick up her husband from work, when 42-year-old Tyrone Absolam crashed into Diana Granobles’ 2019 Chevrolet Cruze just outside Kennedy Airport.

Diana Granobles was turning left onto Guy R. Brewer Blvd. from Rockaway Blvd. in Springfield Gardens when Absolam slammed his 2018 Nissan Altima into her car, cops said. Absolam, who admitted to drinking vodka, had three passengers, including a 12-year-old boy and 16-year-old girl, authorities said.

Lorenzo Granobles is still in shock, his cousin said — and was facing hard decisions about their other two children. He’s surrounded by his family in Woodhaven, his cousin said.

“Diana and Lorenzo’s two other kids are back in Colombia with Diana’s parents,” Javier Granobles said. “It’s still too early for him to think about.”

He has to choose whether to keep his children in Colombia, or bring them to New York to live with him and his extended family, Javier said.

“He hasn’t made a decision yet, but we are trying to guide him to see what is best for him and the two kids,” his cousin said. “He has lost two. It’s him and his wife and his three kids, and he lost half of them.”

Two years ago, Diana moved back to Colombia with their children because of financial troubles, and returned to New York in March, with Isabella following in June.

Their other two children were supposed to return to New York in August, “so they could have the whole family together here,” the cousin said. “But destiny said, ‘No.’”

“Bella was excited to be back,” Javier Granobles said. “She was happy to get acclimated to New York again and get ready for school in September. … She couldn’t wait to come back.”

Isabella was “your typical 10-year-old,” Javier said. “She loved to play with dolls, see cartoons on TV.”

Lorenzo Granobles works as a driver for a freight company operating out of JFK Airport. Some days, he’d pick his wife up from work; other days, she’d come get him.

“Unfortunately, on this night it was she that finished work first and went over to pick him up,” his cousin said.

As for Absolam, the family wants him to face the full weight of the criminal justice system.

“All we know about him is what we’ve read on the news, that he drank and drove and put his girlfriend and her kids in harm’s way,” Javier Granobles said.

He focused on a remark one of Absolam’s relatives in Brooklyn made to The News: “I can’t tell you what that grown a– man was doing. Just leave us alone and go bother him about it.”

“The answer that they gave, the response that they gave, seems that he’s a person that’s own family has turned his back on,” Javier Granobles said, adding: “We all make bad choices at some point in our life, but his choice has hurt our family.”

Absolam, who was critically injured in the crash, is awaiting arraignment on charges that include DWI and manslaughter.