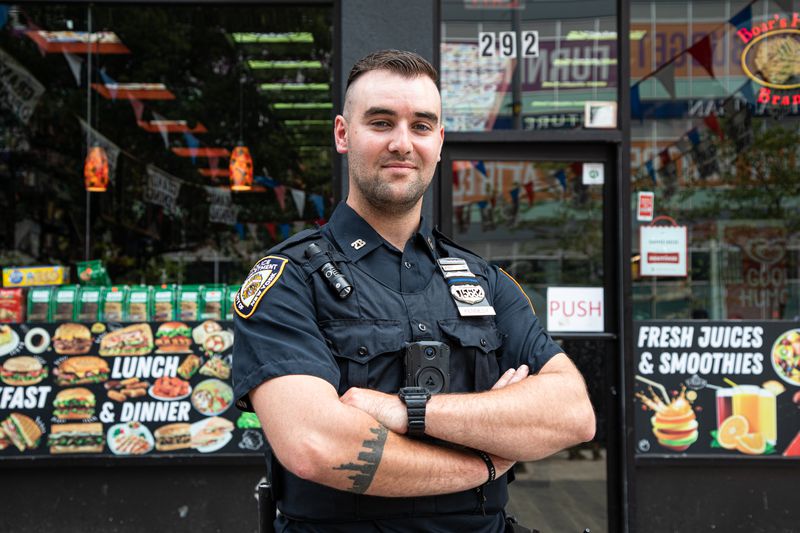 Officer Ronald Kennedy, a former EMT turned cop, recounted his DIY rescue of a stabbing victim by using an empty Lays bag to seal a bleeding chest wound and save the man’s life. Despite the dire circumstances, Kennedy recalled Tuesday how he instinctively knew what to do after arriving outside a bodega on July 7 to find victim Dylan Ubiles lying on the sidewalk fighting for breath.

“There was just an overwhelming sense of comfort in that scene,” he explained. “I’ve been dealing with emergencies for quite some time and I just know it’s best to keep the person calm, in any situation.”

Kennedy, with four years on the job after three years with city EMS, recalled how Ubiles’ breathing was labored as air entered the victim’s lungs though the gaping wound in his chest. The officer quickly told a bystander to run inside the bodega and grab a bag of chips and then asked for some tape from the store.

The bystander delivered a bag of Lays, with Kennedy dumping out its contents before applying the bag to the wound and taping it across the victim’s abdomen.

“With the squared-off edges on the bag and the tape we created that seal so that the air didn’t go in and collapse his lungs,” he cooly explained. “I just needed something that was squared off at the edges and that particular size works well.”

“As soon as Kennedy put that dressing on, it was immediate,” recalled Grieve. “It was night and day difference. He wasn’t out of the woods but it was an immediate and obvious effect. When EMS came, we rushed him into that ambulance. And I think that ambulance left the quickest of any medical job I’ve been to.”

In an interview, Ubiles thanked the hero cop. “He made sure I got to the hospital,” a grateful Ubiles said. “He took care of me.”

Asked if he had a favorite brand of chips, Kennedy quickly said he preferred Lays.

The bystander who grabbed the chips inside the bodega stopped by before the news conference with the life-saving cops to give them some props.

“Those officers did an amazing job,” he said. “Great job.”

And Inspector Andrew Brown, commanding officer at the 28th Precinct, praised the effort by his cops.

“Who would have thought that one of my guys would have a MacGyver moment?” he asked. “Really an outstanding moment for the NYPD.”