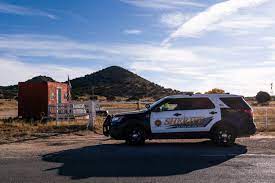 Baldwin repeatedly said “What the f— just happened?” after a shot from the firearm he was handling on the movie’s set fatally struck cinematographer Halyna Hutchins, the Los Angeles Times reported in a piece out Sunday that detailed the scene.

Hutchins was reportedly helped to the ground by others on set after she was shot, with a boom operator telling her, “Oh, that was no good.”

Baldwin was rehearsing a scene for the Western in which he drew a prop gun and pointed it toward a camera, the film’s director, Joel Souza, told investigators.

“Rust” assistant director Dave Halls told officials he didn’t realize the gun was loaded when he gave it to Baldwin on the movie’s New Mexico set.

An investigation into the incident that occurred at the Bonanza Creek Ranch in Santa Fe is ongoing. Last week, local authorities said they suspect there were multiple live rounds on the film’s set.

“We suspect that there were other live rounds, but that’s up to the testing,” Santa Fe County Sheriff Adan Mendoza said. “Right now, we’re going to determine how those got there, and why they were there, because they shouldn’t have been.”

An affidavit released by the sheriff’s office last week said armorer Hannah Gutierrez Reed claimed to officials that “no live ammo is ever kept on set.”

Halls told investigators he “could only remember seeing three rounds” when he looked at the gun, according to the document.

“He advised he should have checked them all, but didn’t, and couldn’t recall if (Gutierrez Reed) had spun the gun,” reads the affidavit.

Baldwin, 63, described Hutchins as “my friend” while speaking with paparazzi photographers on Saturday.

“The day I arrived in Santa Fe to start shooting, I took her to dinner, with Joel (Souza) the director,” he said. “We were a very very well-oiled crew shooting a film together and then this horrible event happened.”

Souza was also wounded in the shooting incident.