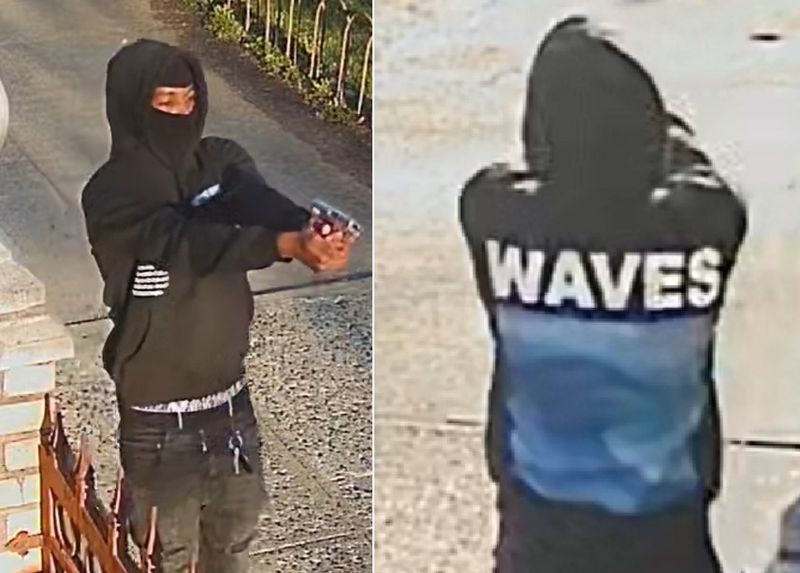 The gunman who shot a 3-year-old girl walking with her father in Brooklyn was aiming at another dad and child when the innocent toddler took a bullet to the shoulder, cops said Saturday.

The revelation comes as cops released surveillance images of the gunman in the hopes that someone recognizes him.

The triggerman was aiming at a 28-year-old man putting his 2-year-old son into a car on Riverdale Ave. near Amboy St. in Brownsville when he opened fire at 6 p.m. Friday, cops said.

He completely missed his target, but one bullet went wild and hit a 3-year-old girl leaving the Creative Minds Day Care on the same block with her father.

“She was just standing there and her father didn’t even know she was shot,” said one neighbor, who asked not be named. “He was looking at her and then he realized.”

The child’s father held her in his arms as he frantically ran down the street, video shows.

Cops rushed the child to Brookdale Hospital. The toddler was later transferred to Maimonides Medical Center and is expected to survive.

The gunman jumped into a four-door BMW operated by a second man that was last seen speeding off down Thomas Boyland St., cops said. No arrests have been made.

It was the third time a child was hit by stray bullets in the city this year.

On Monday, a 7-year-old girl was grazed in the stomach as she and her mother stood on the corner of W. 30th St. and Surf Ave. in Coney Island. She was taken to NYU Langone-Brooklyn in stable condition.

On Jan. 29, a little Bronx girl two days shy of her first birthday was shot in the face as she sat in the backseat of a car parked on Valentine Ave. near E. 198th St. in Bedford Park. The girl miraculously survived.

The shooter is described as a dark-skinned man with a black mask over his face, black jeans and a black-hooded sweater with the word “Waves” on the back, cops said.

Anyone with information regarding the shooter’s whereabouts is urged to call NYPD Crime Stoppers at (800) 577-TIPS.