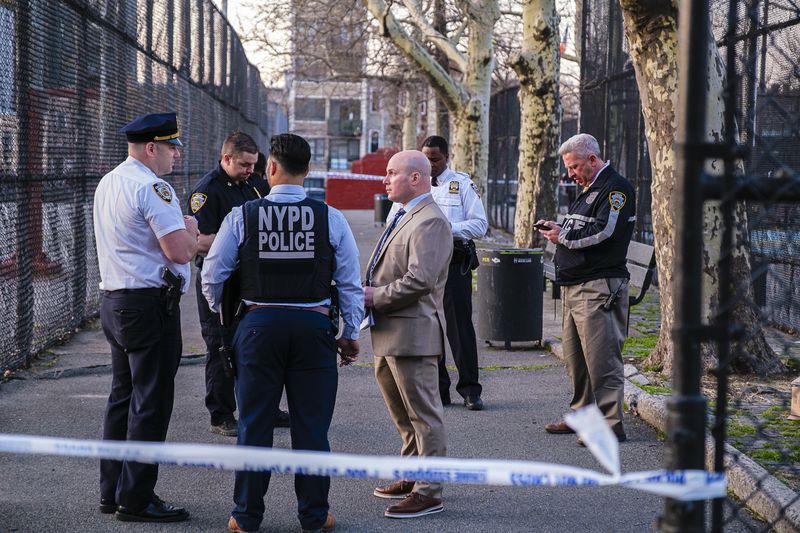 A gunman killed a 20-year-old man in a Brooklyn playground Friday in a shooting that sent frightened children and horrified parents running, police and witnesses said.

Gunfire rang out on a basketball court at St. Andrew’s Playground on the corner of Atlantic Ave. and Kingston Ave. in Bedford-Stuyvesant about 6:40 p.m., cops said.

“There were some games going on and then like three shots,” said a 57-year-old man who asked not to be named. “I was shouting, ‘Get down! Get down! Those are shots!’”

“It was a big gun,” he continued. “It sounded like a cannon.”

The victim, identified by family as Daquan Trantham, was shot once in the chest and once in the face, said police. Officers responding to the scene attempted life-saving CPR on the man, but it was too late, the witness said.

“He was lying there face up in the corner of one of the small basketball courts. He wasn’t moving,” the witness said.

Children playing in the playground “scattered” after the gunfire, police sources said.

“People were going crazy running out with baby carriages,” the man said.

Medics rushed the victim to Interfaith Medical Center, but he could not be saved.

Trantham’s grieving family gathered outside Interfaith on Friday night after learning of his death.

“He was a high school graduate and a hard worker,” said his father, Toriano Trantham. “He was a good kid with a bright smile.”

The younger Trantham worked at a FedEx warehouse overnight, his aunt said.

“How does somebody get shot in broad daylight with the police posted outside the park?” the aunt asked. “How do people do this, and how do people deal with their kid being shot?”

Police were still searching for the shooter Friday night, and did not immediately release the victim’s name.