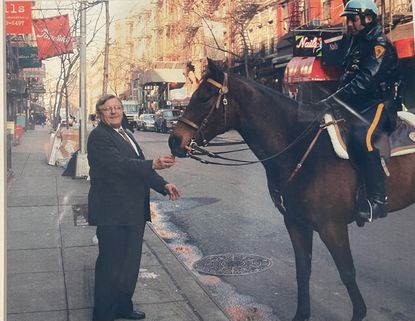 Mosconi owned and operated Monte’s Trattoria and Villa Mosconi restaurants, stalwarts of the Village gastronomic scene for more than a generation.

The eldest of seven siblings, Mosconi was born in the northern mountainous region of Piacenza, Italy. He was a veteran of the Italian Army stationed at Lake Como.

In his 20s, he moved to London, where he met Lucia, his wife of 37 years and went on to become a noted restaurateur in London.

His eateries in the heart of Greenwich Village were a true family business, as Mosconi ran them with his brother and sisters.

“He had a humble, sweet and magnetic personality,” said Bob McGee, a longtime family friend. “He loved everyone and treated everyone the same. He was a very strong man with a very tender loving heart.’’

He is survived by his children Gianpaolo, Franco, Marco and Angela; seven grandchildren; two great-grandchildren; six siblings, and many nieces, nephews, and cousins.

Mosconi will be be buried in London alongside his wife.

In lieu of flowers, donations may be made in memory of Mosconi to the Missionaries of Charity on Washington St. in New York, or to the Franciscan Friars of the Renewal at https://www.franciscanfriars.com/donate.