‘Get the f— away from me!‘: Straphanger slices woman with knife for standing too close to him on NYC subway 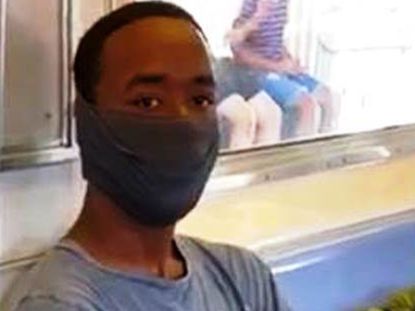 A straphanger with a knife hanging from his neck sliced a woman on a Queens train for standing too close to him, police said.

The 29-year-old woman boarded the southbound 7 train at the Roosevelt Ave.-Jackson Heights station around 4:30 p.m. Wednesday and ended up standing in front of the suspect, who was seated by the doors wearing a surgical mask.

The outraged man suddenly began shouting at the woman for standing too close and kicked her.

“Get the f— away from me!” the man screamed, according to cops.

When the woman took out her phone to film him, he pulled out a folding knife dangling from a lanyard around his neck and sliced her left arm.

Cops on Thursday released a portion of the video which shows the suspect lunging at the victim, though stops short of showing the actual attack.

The injured woman ran back onto the station as the train doors closed, while the suspect stayed on the train, police said.

The suspect is believed to be a Black man, in his 20s, about six-feet tall with a slim build, brown eyes and short hair.

Anyone with information regarding this incident is urged to call NYPD Crime Stoppers at (800) 577-TIPS.