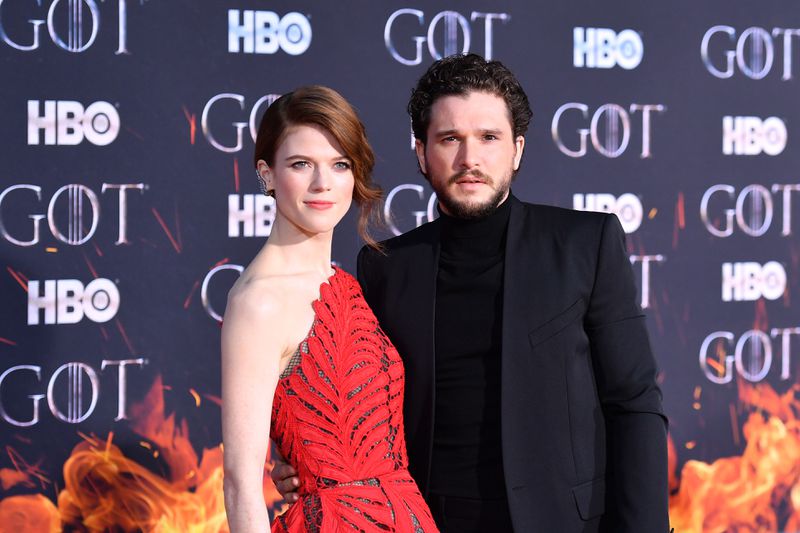 Kit Harington just got a Stark reminder about impending fatherhood.

The Emmy-nominated “Game of Thrones” portrayer of Jon Snow — the illegitimate son of Ned Stark — and his wife, actress Rose Leslie, are expecting their first child.

Leslie, 33, who played Ygritte on the long-running HBO fantasy series, made the announcement in grand fashion. For a black-and-white photo shoot for Make Magazine, she posed in a gorgeous Stella McCartney dress from which her baby bump clearly protrudes.

“A very special all-woman-team photographic shoot capturing Rose at this wonderful time as she prepares for motherhood for the first time!” wrote the magazine’s editor Ursula Lake on Instagram.

So wonderful working with the beautiful Rose Leslie for the cover story of @make_magazineuk out now! A very special all woman team photographic shoot capturing Rose at this wonderful time as she prepares for motherhood for the first time! My team were: @billiescheepersphotography @liztaw doing beautiful hair and @justinejenkins wonderful makeup. Rose wears @stellamccartney. Huge thanks to @vrwpublicity for organising the shoot and to Hannah Rand for her interview. #roseleslie #makemagazine #rose #portraitphotography #portrait #interview #covershoot #cover #stellamccartney

The baby revelation comes on the heels of another “Game of Thrones” alum announcing she had become a first-time mom. Sophie Turner, aka Sansa Stark, confirmed in July that she and husband, Joe Jonas, were the proud parents of a baby girl named Willa.

Harington, also 33, met Leslie on the “Game of Thrones” set in 2012. They were wed six years later in Scotland.

Leslie, who co-starred with Christine Baranski for three seasons on the CBS drama “The Good Fight,” will soon be appearing on the big screen in the highly anticipated Kenneth Branagh whodunit “Death on the Nile.”

Harington is gearing up for the Marvel Studios film adaptation of “Eternals.” The film, which won’t be out until November 2021, will co-star Angelina Jolie and Salma Hayek.