French woman, 22, said she was attacked by 3 men because she was wearing a skirt 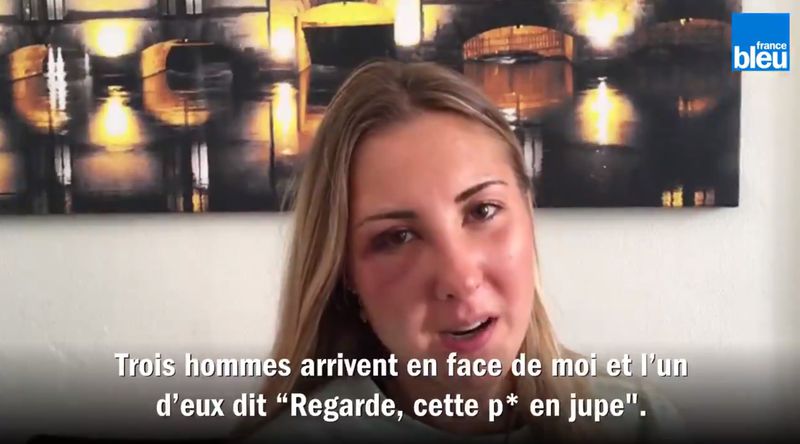 A 22-year-old student said she was attacked in broad daylight by three men last week simply because she was wearing a skirt.

The woman, identified only as Elisabeth, told French radio station France Bleu Alsace that she was walking home in the northeast French city of Strasbourg, when three men in their 20s approached her.

After she calmly managed to respond, “Excuse me?” the men replied, “You shut up b–h and you lower your eyes.”

Two of the men dragged her arm, while a third punched her in the face before they all fled, she said.

More than a dozen witnesses saw the incident, but nobody offered to help.

“This is what revolts me the most in the incident,” she said.

Elisabeth, who ended up with a black eye, later filed a report with Strasbourg police.

On Wednesday, Marlene Schiappa, a junior minister in charge of citizenship, who previously served as secretary of state for gender equality, visited Strasbourg to discuss the safety of women in public.

“A woman is never hit because she wears a skirt,” Shiappa told France Bleu Alsace. “A woman is hit because there are people who are misogynistic, sexist, violent, and who free themselves from any law and any rule of civility by striking them.

Five days after the incident, France Bleu Alsace, reported that two 20-year-old women were also assaulted in Mulhouse, about 70 miles south of Strasbourg, after a man told one of them her skirt was “too short.”

In August 2018, France passed a law to tackle street harassment of women. According to the BBC, about 1,800 fines have been given to offenders since then.

Strasbourg police estimate that less than 10% of women who are victims of street harassment report the abuse to authorities.