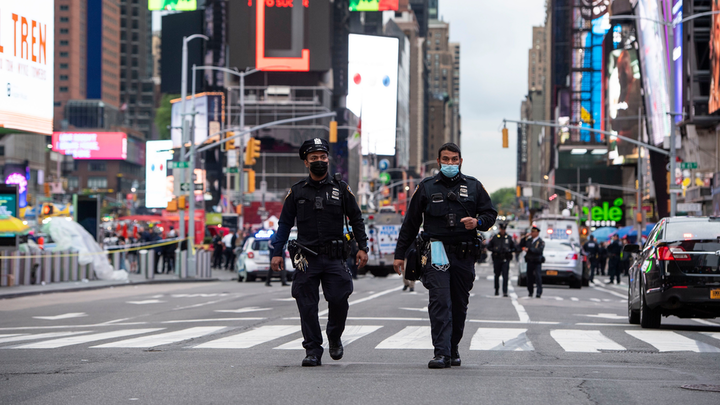 Three people — two women and a 4-year-old girl on a toy shopping trip with family — were hit by stray bullets in Times Square on Saturday afternoon when a gunman tried to settle an argument with a gun, police said.

When gunshots rang out near W. 44th St. and Seventh Ave. around 4:55 p.m., police officers about a block away immediately reported the shooting and ran to the scene, said Police Commissioner Dermot Shea.

None of the three victims were known to each other, said police.

The victims were rushed to local hospitals. Their injuries did not appear life-threatening. Shea described the wounded 4-year-old, identified by sources as Skye Martinez of Brooklyn, as “a very brave girl,” and said she was undergoing surgery at Bellevue Hospital.

One of the injured women, 23-year-old Rhode Island resident Wendy Magrinat, was hit in the leg. She was visiting Times Square with relatives after their plans to visit the Statue of Liberty went awry, said Shea.

The third victim, 43-year-old Marcela Aldana of New Jersey, was struck in the foot.

The mayhem began when between two and four people began arguing on the street, Shea said.

“It is during this dispute that at least one person pulls out a gun … It is during that pulling out the gun and the gunfire that three individuals that were not involved in the initial dispute were struck.”

“I heard three loud shots,” said Sandy Espinoza, 42, a visitor from Illinois who says she was standing at W. 46th St. and Seventh Ave. when the gunfire erupted.

“Everybody was running,” Espinoza said. “People were panicking and screaming. It was like a stampede of people. We were worrying we were going to get run over by people. We ran with everyone else.”

One of the wounded women screamed, “My leg!” recounted Khadim Sakho, 25, a street vendor from Manhattan.

“They were bleeding and the lady was crying,” he said.

The 4-year-old was in a stroller and accompanied by members of her family, said police sources.

“The mother was crying. She said ‘I’m good, I’m fine,’ and then motioned to cops with a thumbs up,” said Sakho.

A Twitter user posted video of a police officer running with the girl in her arms toward a waiting Fire Department ambulance.

Police issued video and a still photograph of the suspect later on Saturday.

After the shooting, much of the area was blocked to pedestrians and motor vehicle traffic.