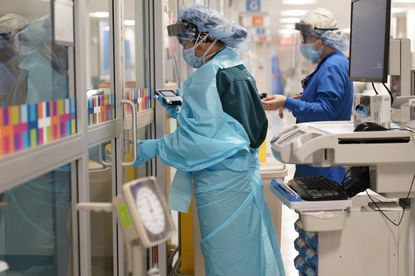 The federal government has for months refused to reimburse New York City’s public hospital system for more than $860 million in coronavirus-related emergency expenses due to a Kafkaesque payout formula that is incompatible with the “real world,” according to a top-ranking local public health official.

NYC Health + Hospitals, the entity overseeing the city’s 11 public hospitals, first submitted a reimbursement request with the Federal Emergency Management Agency in October 2020 for $864 million in costs associated with hiring extra clinical staff during the peak of the pandemic last year, Dr. Mitchell Katz, who heads H+H, wrote in a previously unreported letter obtained by the Daily News.

Katz’s letter, which is dated June 11 and addressed to FEMA Administrator Deanne Criswell, goes on to state that the feds rejected his reimbursement request in March of this year.

According to Katz, the feds claimed they could not pick up the tab because H+H had combined coronavirus-related hospital expansion costs — which are eligible for reimbursements — with regular hospital operations, which are not.

But Katz told Criswell in the letter that FEMA’s reimbursement protocols make little sense since every section and health care worker at public hospitals in the city were working on COVID-19 response during those “horrible months” between March and August 2020.

He noted that many patients who were admitted for non-COVID-19-related reasons during that period ended up testing positive for the virus while hospitalized, as the pandemic wreaked havoc across the five boroughs.

For that reason, staff “operated under the assumption” that every patient at a public hospital in the city at the time was at risk and took “COVID precautions in treating them,” justifying Health + Hospitals’ request for federal reimbursement, Katz wrote.

“The distinction being assumed by FEMA between COVID and non-COVID areas is an artificial one not reflective of the real world operational and clinical circumstances and needs faced by H+H hospitals,” Katz wrote.

In addition to staffing, the expenses H+H submitted for FEMA reimbursement relate to patient care and hospital equipment, according to a city official familiar with the matter.

During an unrelated congressional hearing Tuesday, Rep. Ritchie Torres, a freshman Democrat who represents parts of the Bronx, asked Criswell about the “inexplicable decision to deny or delay” the H+H reimbursements.

Criswell — who served as administrator of the city’s emergency management agency throughout 2020 before taking over as FEMA boss in April — appeared unfamiliar with the matter and suggested H+H’s reimbursement request should not have been denied.

“I don’t have the specifics of the denial that you’re talking about, but those types of costs are eligible costs,” Criswell told Torres, adding that she was working “hand in hand” with H+H in her previous capacity and that 2020 “was the most challenging year that I have gone through.”

A spokesman for FEMA’s Region 2 office, which encompasses New York, said after the hearing that the agency is now “looking into the issue” raised by Torres.

However, Katz said in his letter that NYC Health + Hospitals representatives met to no avail with FEMA officials from Region 2 several times in April in hopes of resolving the issue. The most recent meeting was on April 30, four days after Criswell was sworn in as FEMA administrator, according to Katz.

Lost in the shuffle of FEMA’s bureaucracy is the fact that more than eight months have now transpired since H+H first filed its reimbursement request.

Katz said the lengthy delay has resulted in a precarious financial situation for the city’s public hospitals that could jeopardize their “safety net system.”

As a result, Katz requested that FEMA immediately consider cutting H+H a reimbursement check for $354 million, which would cover the most pressing economic gaps for the hospital system, before processing the full request.

While the the city has almost returned to normal since then, with vaccination rates ticking up and COVID-19 infection rates plummeting, Katz stressed throughout his letter that H+H hospitals were “the epicenter of the epicenter” during the dark days of 2020.

“Recall that NYC was the first American city to experience the rapid and devastating COVID-19 spread, so there was no rule book or script to follow,” he wrote. “We in NYC and at H+H in particular were setting the standards for the nation.”