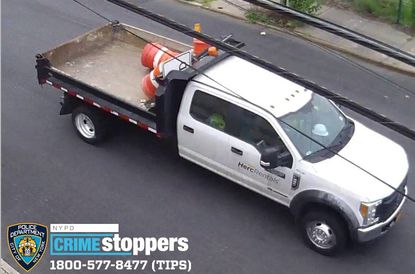 A convicted felon on parole has been accused of posing as a utility worker, then fatally beating an elderly Bronx man during a botched home-invasion robbery.

A tipster helped police locate Luis Bonilla, 32, who was arrested Monday in the Aug. 3 killing of 91-year-old Nicolo Rappa just days after the NYPD offered a $10,000 reward in the case.

Bonilla was wearing a yellow hardhat, reflective vest and a mask when he showed up on Rappa’s block — on Wickham Ave. near Waring Ave. in Pelham Gardens — about 12:30 p.m., cops said.

Law enforcement sources described him as a drug addict, and said he was roaming the block, looking for parcels to steel off people’s porches.

When he spotted Rappa, he pretended to be a utility worker and tried to convince the retired construction worker to let him into his home, sources said. Rappa resisted, and Bonilla tied him up, then beat him to death, sources said.

When cops arrived, they found Rappa bound by the hands and unconscious in a garage-turned-storage shed behind his home. A towel was placed over his head, cops said.

Rappa was living out his retirement while caring for his 96-year-old wife, neighbors said.

Court records show Bonilla has a history of violent robbery. On Dec. 26, 2016, he approached a woman on a Bronx street, blasted her with pepper spray and took her purse, the records show.

He was convicted of attempted robbery in that case in February 2018 and sentenced to four years in prison, followed by five years of supervised release. Public records show he was released to parole in January, though he would have finished his prison term July 23.