Federal judge whose son was killed by gunman dressed as FedEx driver speaks out: ’We are living every parent’s worst nightmare’ 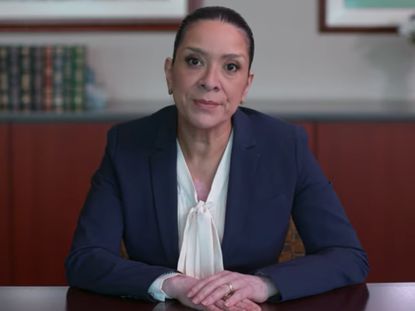 A federal judge whose son was killed and husband wounded by a crazed gunman disguised as a FedEx driver detailed her last moments with her only child in an emotional video posted online.

“Two weeks ago, my life as I knew it changed in an instant and my family will never be the same,” U.S. District Judge Esther Salas says in the video posted to YouTube on Monday.

The shocking attack on Salas’s family in New Jersey happened July 19th. The accused gunman, attorney Roy Den Hollander, was later found dead in an apparent suicide in upstate New York. He is described as an anti-feminist lawyer, and officials said Salas had recently presided over one of his cases.

That morning the Salas family was getting ready to clean up after a party. They had just celebrated her son Daniel’s 20th birthday.

“Daniel always wanted to spend his birthdays with his dad and me so he asked that we host a party for a few of his Catholic University of America friends,” she explains in the video.

Despite the pandemic, they agreed.

“We thought we could adhere to safety guidelines,” she says.

After going to church with her husband, Salas said she went alone to the basement to wake up her son.

“We were chatting, as we always do, and Daniel said, ‘Mom, let’s keep talking. I love talking to you, Mom,’” Salas says, struggling to hold back tears. “And it was at that exact moment that the doorbell rang.”

“I later learned that this monster, who had a FedEx package in his hand, opened fire,” she says in the video, her voice shaking. “But Daniel, being Daniel, protected his father and he took the shooter’s first bullet directly to the chest.”

Her son later died. Her husband, Mark Anderl, a 63-year-old criminal defense lawyer and former prosecutor, was shot three times, she explains. One bullet struck his chest, another his stomach, and the third his right forearm.

“While my husband is still in the hospital recovering from his multiple surgeries, we are living every parent’s worst nightmare,” she pauses for a moment, before adding: “‘making preparations to bury our only child, Daniel.”

Salas noted that the gunman was easily able to find her personal information online. She then pleads for lawmakers to help protect the private details of federal judges, so no one else suffers the same fate as she and her family.

“My son’s death cannot be in vain, which is why I am begging those in power to do something to help my brothers and sisters on the bench,” she says.