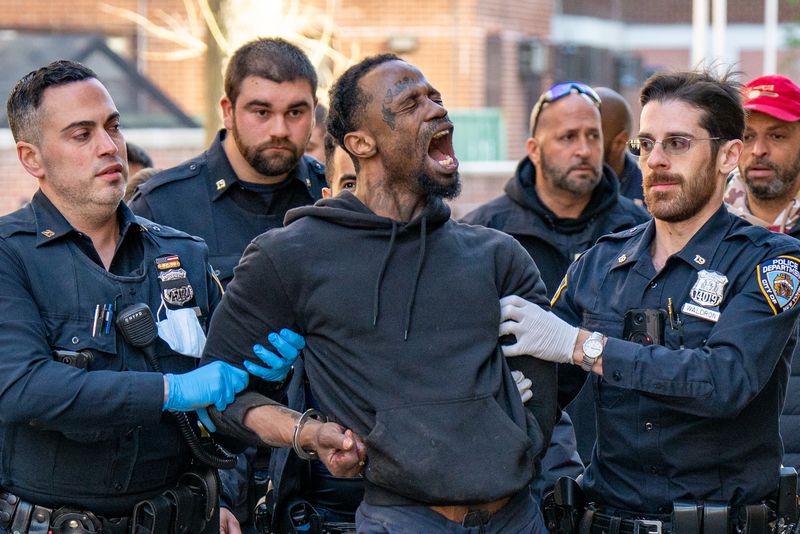 An ex-con just out of prison and high on meth went on an unprovoked assault spree in Manhattan Monday morning, punching out one stranger and bashing a man and woman with a bottle before he was caught after attacking a fourth victim, police said.

A fifth victim who turned up at Metropolitan Hospital with a knife sticking out of his back may have also been attacked by the same 32-year-old suspect, police said.

The woman, slashed on the head with a broken bottle, was rushed to Harlem Hospital and is expected to recover. The three other victims, all men including a good Samaritan who was bashed with the bottle while trying to help the woman, were taken to Metropolitan Hospital and were not badly hurt.

The suspect, high on crystal methamphetamine, struck at three different locations on the Upper East Side and in East Harlem in a short span.

Police said his first victim was a man he knocked out with a punch to the face at E. 96th St. and Second Ave. just past 8 a.m.

The second victim was confronted at E. 99th Street and Second Ave., with the attacker trying to pull her out of a car, police said. When the good Samaritan intervened the assailant bashed him over the head with a bottle, police said.

The force of the blow shattered the bottle, with the attacker then slashing the woman in the head with the broken bottle before heading downtown, where on E. 92nd St. near First Ave he assaulted another man.

A 19th Precinct police officer who was nearby at the time moved in and arrested this suspect. His name is being withheld because he has not yet been charged.

It wasn’t clear where the man with the knife in his back was attacked, police said.

The suspect, who lives in the Bronx, has 27 arrests on his record, included nine that are sealed and two that were voided. He served two stints in prison, public records show.

He served more than five years for selling drugs near a Manhattan school and was paroled in July 2018, records show.

After a criminal contempt conviction, also in Manhattan, he was sentenced to up to three years in prison but was conditionally released on March 14.