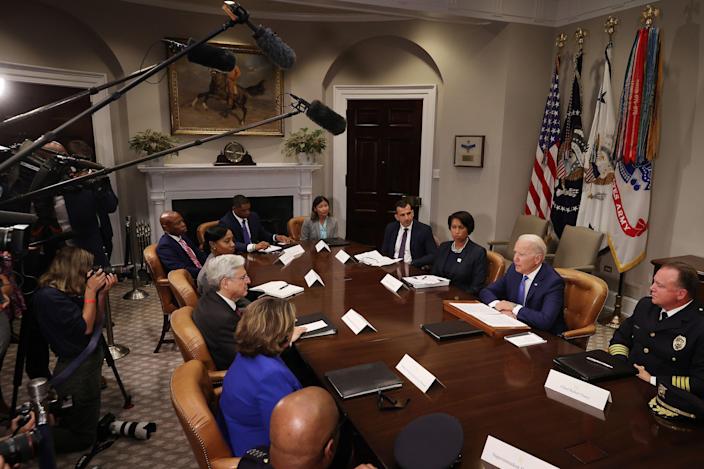 New York City mayoral hopeful Eric Adams and President Biden found plenty of common ground Monday as they met at the White House for a strategy session on how to stem a nationwide surge in shootings. But the two men struck slightly different tones on whether police departments like the NYPD should be expanded as part of the effort.

The Brooklyn borough president, who was declared the winner of the city’s Democratic mayoral primary last week, said after the sit-down with Biden that he does not necessarily see a need for growing out the NYPD if he takes over the reins at City Hall as expected next year.

“Let’s look at how we’re using our police officers and then make the determination, ‘Do we need more?’ The question is still a question mark,” Adams, a retired NYPD captain, told reporters outside the White House, adding he is mostly concerned about how existing police resources are allocated.

Ahead of the meeting — which was also attended by Attorney General Merrick Garland and the Democratic mayors of San Jose and Washington, D.C. — Biden had an alternative take on the sensitive question of whether to expand police departments at a time when gun violence is on the rise in several U.S. cities.

“We know when we utilize trusted community members and encourage more community policing, we can intervene before the violence erupts,” the president said.

The nuanced differences on police expansion aside, Biden and Adams agreed on the overall need to address a rise in violent crime in cities like New York, Chicago and Los Angeles.

They both voiced faith in curbing violence through a mixture of targeting illegal gun dealers and investing in community-based crime prevention efforts and social services such as summer job programs for at-risk youth.

“We can’t continue to respond to symptoms. It’s time to respond to the underlying causes of violence in our city,” Adams said. “This president is making it clear that he’s going to redefine the ecosystem of public safety, and that includes identifying the role of police, schools, families, resources, employment — this is where we need to go as a country — and I have to take my hat off to this president.”

New York has seen an especially troubling spike in shootings this year. Gov. Cuomo earlier this month issued an executive order declaring gun violence a statewide “disaster emergency,” citing data that showed shootings are up by more than 35% in the city this year as compared to 2020.

Adams centered his mayoral bid on public safety after the last few months of the race became focused on a spree of deadly shootings across the five boroughs.

As a retired cop, Adams’ pitch resonated with a broad coalition of voters, and he’s widely expected to cruise to victory over Republican mayoral challenger Curtis Sliwa in November’s general election.

Monday’s meeting marked a welcome opportunity for Adams to bolster his national persona, and Biden praised him and the other local politicians in attendance for their work on public safety issues.

Though he left the question of NYPD expansion up in the air Monday, Adams has previously called for bringing back the department’s plainclothes Anti-Crime unit, which was disbanded last year amid concern about its involvement in some of the city’s worst police shootings.

New York Rep. Alexandria Ocasio-Cortez, who supported left-wing candidate Maya Wiley in the city’s mayoral primary, said in an appearance on the “Democracy Now” TV program that the focus should be on investing in communities, not police departments.

“The way that we counter these increases in incidents is through economic opportunity and community investment in communities where these surges are happening,” Ocasio-Cortez said. ”The message should not be that we should continue to over-police and over-surveil people.”