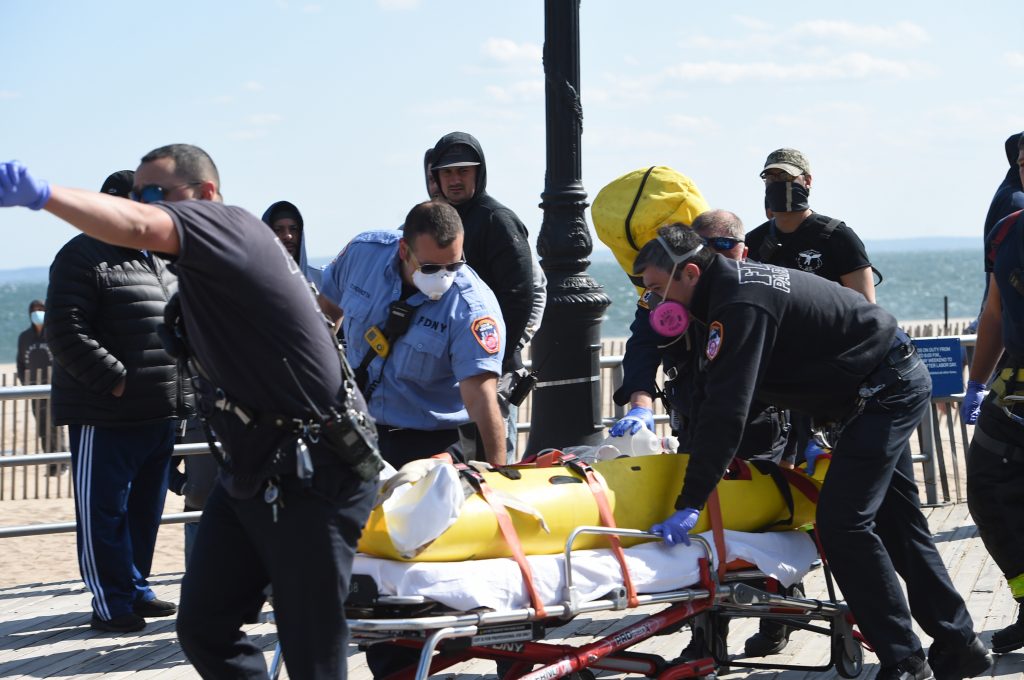 A young woman was pulled from the frigid, choppy waters of Coney Island Beach this afternoon by a Good Samaritan assisted by NYPD School Safety Officers who were patrolling the community for only their third day, police said.

The woman, unidentified at this time, was brought back to life by Emergency Medical Technicians and firefighters who immediately began CPR on the woman after she was pulled from the water.

She was rushed to Coney island Hospital where she is in critical condition, police officials said. “She had a heartbeat,” exclaimed one top cop.

The woman was pulled out of the water at Ocean Parkway in Coney Island by a Good Samaritan Mike Perez of downtown Brooklyn, who just happened to have his wet suit on where he usually goes kite surfing and swimming.

“At first she took off her pants and was walking on the beach without pants and just wearing a jacket, but then she went into the water – she looked like she was splashing and playing and people were watching,” said Perez, an unemployed artist and bartender because of the coronavirus. “Then, I wasn’t paying attention to her for a moment and she was gone. I called 911 and told them where I was, but then I said to myself, ‘I’m wasting time, I should go in there’ so I told the operator I have to go and hung up and went in.”

Perez made his way along the rocky jetty when he spotted her foot in the surf, grabbed her, and started dragging her to shore. Waiting for him was School Safety officer Anthony Baisden, his third day assigned to the beach. He helped drag the woman to shore where they were also met by cops from the 60th Precinct.

EMS also arrived quickly and began CPR and were able to get a heartbeat, police say. The woman was loaded onto a police gator, a four-wheel drive all-terrain vehicle and driven to a waiting ambulance.

“I don’t know, there really wasn’t heroics, I was just doing my part,” said Perez, born and raised in Brooklyn, a Brooklyn College alumni. He then thanked the safety officer for his help dragging the unconscious woman to shore.

School Safety Officers began patrolling the boardwalk and beaches of Coney Island on Monday after the NYPD postponed the summer detail to save money and manpower for the Memorial Day weekend.

“People have been so friendly to us, they seem really happy that we are here,” said one safety officer, normally assigned to a school in Brooklyn. “It’s really different from what we normally do.”

The city is in the process of deciding if the beaches will be open this summer and how that might look in the age of Covid-19. It was also unclear whether an NYPD detail will be assigned after Memorial Day, though officials privately expect that it will occur to help control massive crowds that are expected this summer despite COVID-19.