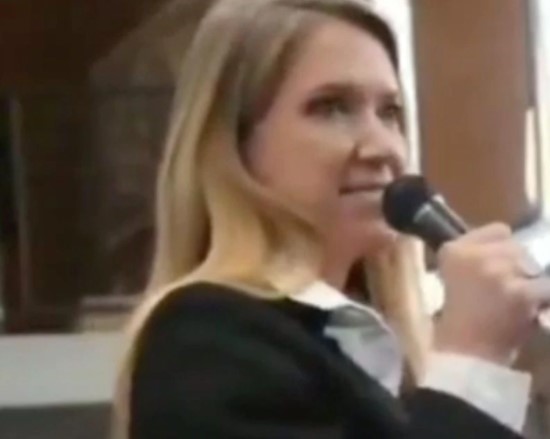 Medical experts are scrubbing away at a TikTok video featuring a Georgia doctor who allegedly, and maybe unwittingly, confused some people into believing COVID vaccines could be removed from a person’s system with a “Detox the Vaxx” bath consisting of baking soda, Epsom salt and Borax.

That doctor came clean Tuesday to tell her side of the story.

NBC News reported Friday that Dr. Carrie Madej made her comments during an address where she recommends baking soda to deal with “radiation,” Epsom salt for “poisons,” and Borax to clean out “nanotechnologies.”

“When Madej talks about ‘nanotechnologies,’ she’s referencing the ‘liquefied computing systems’ she falsely believes are in the vaccines,” reporter Ben Collins tweeted.

While nanoparticles are described by Reuters as “tiny lipid droplets that transport and protect the vaccine component,” some conspiracy theorists have falsely suggested such nanotechnologies could be robotic devices planted inside people.

Collins included a very short video of Madej recommending the aforementioned bath treatment, though she doesn’t mention COVID vaccines in that clip. It’s unclear who shot the original video, which is labeled “Detox the Vaxx.”

On Tuesday, Madej said her statements were taken out of context.

“For the record — I have never stated that I can detox anyone from the current jabs. The (mainstream media) has never contacted me and they are twisting my words to fit their narrative,” says a message on CarrieMadej.com. “I give people ideas on how to detox from poisons that we are all exposed to from our environment. The detox was never specific for a jab or vaccine and I have always advised not to take the jabs since they are experimental and no one knows how to detox from them.”

Johns Hopkins Medicine reports “the three COVID-19 vaccines authorized for use in the U.S. are safe and effective in helping prevent serious disease or death due to the coronavirus.” A Reuters fact-check said COVID vaccines have been thoroughly tested and are not considered “experimental.”

Antivaxxers on Facebook/TikTok are begging for advice on how to “detox” loved ones who got the shot.

They caved to mandates and want help from influencers.

Some say they’re doomed to death, infertility, or government tracking.

But others have “remedies.”

Madej’s Twitter account has been suspended and the outlandish video was reportedly pulled from TikTok last month, but the misinformation continues to spread. Salon.com reports “imitators” have been inspired by the notion of detoxing away vaccines. According to an NBC report, some people may see the scientifically impossible notion of washing out the vaccine as an answer to federal or workplace inoculation mandates.

The bathwater brew the doctor recommends appears to be a questionable concoction at any rate. WebMD warns that in powder form, Borax can irritate a person’s skin. The site describes Borax as a household cleaning agent that “can be harmful if swallowed, particularly for children.”

Kansas University health systems medical director infection and control Dana Hawkinson similarly told the Kansas City Star “This is nothing that is supported by science or data or anything of that nature.”

Investigative blogger Peter Heimlich posted a letter online calling for the Georgia Composite Medical Board to investigate Madej’s claims and recommended a mental health evaluation of the doctor. Madej made headlines in June 2020 after posting a video on YouTube in which the osteopath claimed “The COVID-19 vaccines are designed to make us into genetically modified organisms.”

More than 300,000 people watched that video, according to the BBC, which reports that Madej warned vaccines would “hook us all up to an artificial intelligence interface.”

Madej has more than 40,000 followers on TikTok. The doc says on her website that she’s “Practicing The Truth in Jesus Through Medicine.”

A video on her site addressing “Transhumanism” features Madej referring to “these injections they falsely call vaccines,” speaking about “nanobots” and suggesting technology could be exploited to turn humans into hybrids if left unchecked.

“People get scared of the word ‘apocalypse,’ but we shouldn’t,” she said.