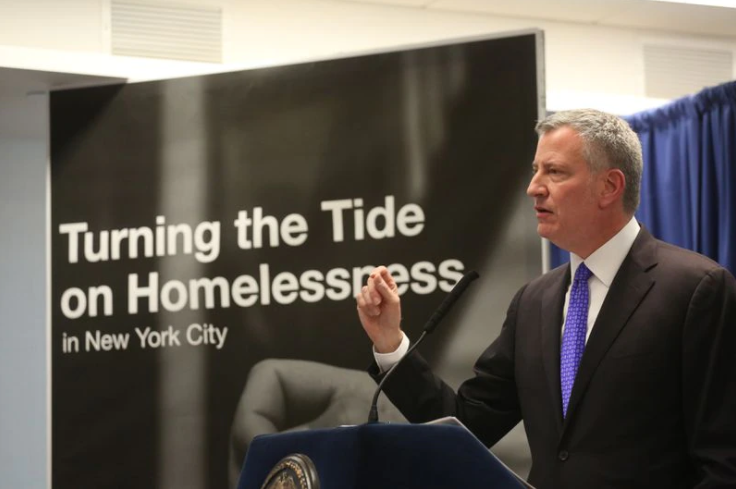 When Mayor de Blasio stepped into City Hall in 2014, the number of homeless people living in shelters was climbing, conditions within the New York City Housing Authority’s more than 2,500 buildings were in steep decline and the city’s poor were staring down the barrel of an affordable housing crisis.

But the newly-minted mayor brought with him a broad promise that those problems would be solved.

Just months before, while campaigning to take the reins from former Mayor Michael Bloomberg, de Blasio vowed that he’d end the Big Apple’s “Tale of Two Cities.” And housing — perhaps more than anything else — exemplified the stark divide between rich and poor that de Blasio said he’d bridge.

He tried, and in some regards, he succeeded.

Through the city’s mandatory inclusionary housing policy, de Blasio and the City Council set the stage for more affordable housing to be built when neighborhoods are rezoned. His administration pushed through rezonings in Brooklyn’s East New York and Gowanus neighborhoods, as well as in East Harlem, a stretch of Jerome Ave. in the Bronx and, most recently, SoHo — bringing with them the promise that more affordable housing would come. A massive expansion in funding for legal services to tenants also prevented hundreds of poor New Yorkers from being evicted and becoming homeless.

But many critics believe de Blasio ultimately failed in accomplishing his overarching mission, especially when it came to NYCHA and addressing homelessness.

“On homelessness, Mayor de Blasio spent his first term, or just about, blaming Mike Bloomberg. Now it’s not wrong to say Mike Bloomberg left him with a mess, and it’s not wrong to say that for maybe the first six, eight months, but at some point, you know, well into year one or two, it’s your problem. You’re the mayor,” said Christine Quinn, who served as Council Speaker during the Bloomberg years and now leads a non-profit homeless services provider.

“So, one, his legacy will be defined by never choosing to get his arms around the problem. Two, once he did start to engage, he took on homelessness as something to manage, not something to end. And if your goal is to manage it, then you accept the existence of it in your city,” she continued. “On day one, the mayor should have said, ‘This is one of the most important issues in the city.’”

Quinn, who ran against de Blasio in the 2013 Democratic primary, said one illustration of his failure to prioritize homelessness was the fact that it took the city more than eight years to pass a bill she originally introduced to increase the amount of money paid out through city housing vouchers.

After Quinn stepped down as Speaker, Councilman Stephen Levin resumed her efforts to push through that policy, but he only succeeded in doing so this year. Levin, though, gives de Blasio’s a more charitable assessment than Quinn.

“This idea that this is some catastrophic failure in policy from the de Blasio administration is absolutely bonkers,” he said.

Levin suggested that de Blasio’s legacy will in some ways be tied to former Gov. Andrew Cuomo because of how state policy plays a substantial role in determining what the city can and cannot accomplish. Two examples he cited are how the state for years resisted providing money to the city to replace boilers in NYCHA buildings and how Cuomo refused to allow the city to fund an increase in state-issued housing vouchers.

In contrast, Gov. Hochul recently signed off on a law upping the amount paid out through state housing vouchers — a bill signing that both Levin and Quinn attended.

But Levin said a portion of the blame for homelessness should go to de Blasio, particularly when it comes to unhoused single adults. While the number of families in city shelters has declined, the number of single adults without a home — especially before COVID — rose precipitously.

“They never really settled on a policy on single-adult homelessness,” he said. “They kind of jumped from initiative to initiative.”

The city did eventually land on the safe-haven model for housing many of the city’s homeless — a departure from dorm-style shelters — and a direction Levin described as promising.

De Blasio’s legacy on housing is not just defined by how he tackled homelessness. When he came into office, NYCHA was in trouble too.

“When we got there, NYCHA had only three months of operating reserves left. It was basically on the brink of going into bankruptcy and receivership,” said Alicia Glen, de Blasio’s former deputy mayor for housing and economic development. “It was really a mess. And of course, it had been a mess for 30 years. Job one was to get it stabilized, which was no easy task, and job two, was to think about how we could slowly, but steadily right the ship.”

That would prove difficult.

During de Blasio’s tenure, NYCHA came under the supervision of a federal monitor after the city failed to test for lead paint in apartments and then lied to the federal government about its lapse.

That, say critics, likely will not soon be forgotten.

“As early as 2017, the Department of Investigation found that NYCHA had failed to conduct mandatory safety inspections for lead paint and it submitted false documents to HUD about it, but rather than attempting to fix the problem, the mayor’s office blasted the report and didn’t take any real action to remedy the problem,” a former senior city official said. “By 2020, the federal monitor who had been appointed found that the number of apartments with lead paint in them was triple the number that the city was reporting. I mean, that’s just outrageous.”

Glen conceded that the administration failed to understand the lead paint problem quickly enough, but said she and he colleagues were not “indifferent.”

“It is a legitimate black mark on all of us that we didn’t understand the depth of the problem sooner, and I’m as guilty as anybody is with respect to that,” she said. “But I would say that once we did understand what was happening, we really sprung into action.”

That wasn’t easy. Glen described having to navigate roadblocks that made removing lead from apartments difficult, including a tangle of confusing HUD requirements, the unions that represent NYCHA workers and a shortage of contractors.

“It was just really hard,” she said.

Rep. Ritchie Torres (D-Bronx) called the handling of the lead paint issue a “failure in operations,” but said de Blasio’s legacy on public housing is far more complicated than just that one scandal.

“He did much to address the capital needs of public housing, but he did far too little to address the operations,” he said. “He made sweeping investments — more than $1 billion in new roofs is no small investment. He took a hands-on approach to addressing the capital needs. Where he failed was in the area of operations. There is no evidence that NYCHA is any more efficient today than it was eight years ago.”

“East New York and Harlem — we’d begun the environmental review necessary before we got there, so of course we were going to go with East New York. It wasn’t like we sat around and thought, ‘Oh, let’s find a really low-income neighborhood to rezone,’ right?” she said. “I mean the thought that people say that, actually they look like idiots. We did East New York because it had already started … that’s why East New York was number one.”

Other rezonings — like the Gowanus rezoning in Councilman Brad Lander’s district — simply took longer because of political resistance.

“There wasn’t like some deep political theory. This is why I find this conversation so annoying,” Glen said. “On my second day of work, I spent two hours listening to Brad Lander lecture me on Gowanus, and yet his [rezoning] took the longest because he’s the most hypocritical, ridiculous human that ever walked. So it wasn’t like we weren’t trying to do Gowanus on the same timeline — it was just impossible.”

Basha Gerhards, the Real Estate Board of New York’s senior vice president for planning, lauded the mayor for his successful push for mandatory inclusionary housing, but said he could have done more to push through more rezonings, including plans to reshape Long Island City and Flushing in Queens, and Bushwick in Brooklyn.

The results of what was actually accomplished — the rezonings in East Harlem, Gowanus and SoHo, for example — could take decades to measure.

“At the end of the day, a rezoning is meant to be an multi-decade plan for a neighborhood,” she said. “Time will tell.”