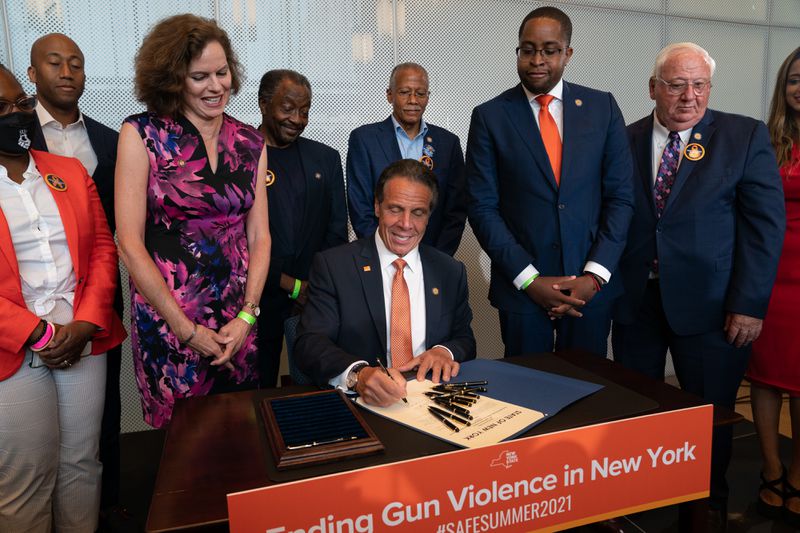 Gov. Cuomo declared gun violence a statewide “disaster emergency” on Tuesday as part of a wide-ranging plan aimed at cracking down on illegal guns and gangs amid a troubling surge in shootings across New York.

The disaster emergency order is the first-of-its-kind in the country and allows the state to quickly allocate money and other resources to areas of New York where gun violence is running rampant, Cuomo said at John Jay College of Criminal Justice in Manhattan.

The order comes less than two weeks after New York’s disaster emergency on COVID-19 expired, and Cuomo pressed the case that gun violence is on par with the pandemic and must also be treated as a public health crisis.

Cuomo’s action came on the heels of a rash of shootings in New York.

Fifty-one people were shot across the state over July 4 weekend, including 26 people in New York City alone, according to police data. In contrast, Cuomo said 13 New Yorkers died from COVID-19 in that same timeframe

To deal with the violence, Cuomo’s emergency disaster declaration puts into motion what he called a “comprehensive” seven-tiered plan.

For starters, Cuomo’s plan requires major police departments across the state, including the NYPD, to share incident-level data on gun violence on a weekly basis with a newly-formed state Office of Gun Violence Prevention. The prevention office will then track emerging trends and deploy state resources to those “hot spots” accordingly.

Cuomo’s order frees up a total of $138.7 million for gun violence intervention and prevention programs, according to a fact sheet from his office.

More than $75 million of that cash will be spent on creating jobs and community activities for “at-risk youth,” with the goal of keeping them from joining gangs and engaging in criminal activities.

According to Cuomo’s office, 21,000 such jobs will be rolled out this summer, with commitments from the Metropolitan Transportation Authority, the NYC Hospitality Alliance and New York State Parks, among other entities.

New York already has some of the country’s strictest weapons laws, but as part of his Tuesday announcement, Cuomo also signed a couple of new gun control bills passed by the Legislature earlier this year.

The first bill makes it easier to sue gun manufacturers and dealers if they’ve sold, marketed, or produced firearms in a way that endangers safety. The second measure makes it illegal for anyone with an outstanding warrant to purchase a firearm in New York, closing a loophole opened under the Trump administration.

On an enforcement front, Cuomo is ordering State Police to form a new gun trafficking task force focused on stopping illegal guns from being smuggled into New York from southern states. The task force will work with police departments in other states to share gun trafficking data and intelligence.

In attendance during Cuomo’s Tuesday event in Manhattan were several members of the State Senate and Assembly, providing the governor with a showing of support as he remains under fire in Albany over his alleged sexual harassment and coronavirus mismanagement scandals.

Earlier in the day, Mayor de Blasio — who frequently butts heads with Cuomo and has called on him to resign over the scandals — painted a rosier picture of gun violence in New York City.

“Comparing June of 2021 to June of 2020, shootings down almost 20%,” de Blasio said, citing data that did not take into account that shootings overall are up this year. “But a lot more work to do.”