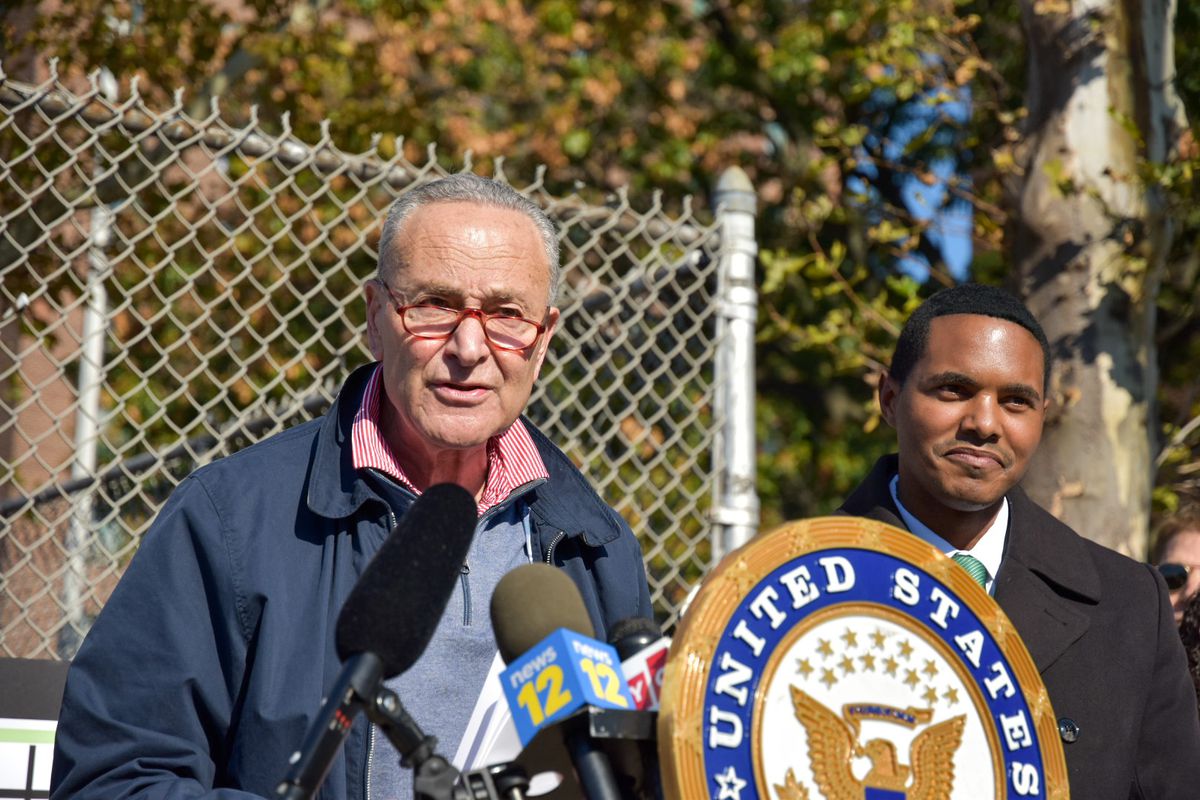 A pile of green from Washington could help turn a sordid stretch of the Bronx into a green space.

Funding secured in the federal infrastructure bill is expected to go toward a reimagining of the Cross Bronx Expressway that could ease pollution stemming from the sooty, congested 66-year-old freeway, a pair of U.S. lawmakers said Tuesday.

Senate Majority Leader Chuck Schumer (D-N.Y.) and Rep. Ritchie Torres (D-N.Y.) convened a news conference near the rumbling road to highlight the potential real-world impact of the $1 trillion infrastructure legislation that passed the House on Friday night. (It passed the Senate in August.)

Schumer said he had spoken to Transportation Secretary Pete Buttigieg about possible highway improvements, like covering portions of the freeway with a deck park and greenery that would shield nearby neighborhoods from clattering noise and poisonous exhaust.

“We’re here to hit the gas on a plan to mitigate the harmful effects of the Cross Bronx Expressway,” Schumer said, flanked by city Transportation Commissioner Hank Gutman and state Assemblywoman Karines Reyes (D-Bronx) at a playground in the Parkchester neighborhood of the Bronx. “The planners didn’t give a hoot about the effect on this community.”

Built by Robert Moses, the Cross Bronx Expressway funnels diesel-powered trucks across crammed neighborhoods. It has been viewed with disdain by many New Yorkers since it was raised in the middle of the 20th century, splitting communities with its six lanes of potholed pavement.

Critics have called it an eight-mile-long symbol of racism that feeds fumes into communities of color. And research has linked truck exhaust from Bronx roadways to high rates of childhood asthma in the borough.

Torres, who grew up in the East Bronx near the highway and struggled with asthma attacks throughout his youth, said the highway is “literally and metaphorically a structure of racism.”

“It has left in its wake decades of displacement and disinvestment and environmental degradation‚” Torres told the Daily News on Tuesday afternoon. “I realized early on that asthma is the cost of living near the Cross Bronx.”

The infrastructure bill carries $7.5 billion for a grant program, called RAISE, to boost local transportation projects like one on the Cross Bronx Expressway, according to Schumer’s office.

RAISE grants are competitive and thousands of projects apply, according to the U.S. Department of Transportation, but Schumer voiced confidence that the plight of the Bronx is at the top of Buttigieg’s agenda. The sweeping social spending blueprint that has hit snags in the Senate could also include an additional $5 billion for grants, Schumer and Torres said.

Buttigieg suggested on Monday that his agency will focus on racism that has been baked into the nation’s urban infrastructure, and he highlighted New York in particular as a site of such blights.

Transportation @SecretaryPete: ” If an underpass was constructed such that a bus carrying mostly Black and Puerto Rican kids to a beach, […] in New York was designed too low for it to pass by, that that obviously reflects racism that went into those design choices.” pic.twitter.com/0XWkDZehYM

Torres said he spoke to Buttigieg months ago and told him that he has the “historic opportunity to be the transportation secretary who reverses the legacy of Robert Moses, who caps the Cross Bronx Expressway and who liberates the Bronx — the South Bronx — from its greatest public health and environmental burden.”

He said a plan to cap the Cross Bronx Expressway would cost an estimated $1 billion.

The Transportation Department didn’t immediately reply to requests for comment on the possible upgrades to the highway. But Schumer expressed delight at the prospect of beginning to correct a decades-old wrong, and creating local jobs in the process.

“If people want to know what the BIF is going to do, what the BBB is going to do — this is it,” Schumer said in the news conference, using acronyms for the Bipartisan Infrastructure Framework and the Build Back Better Bill. “If we do all of this, it is going to create tens of thousands of new, good-paying jobs.”