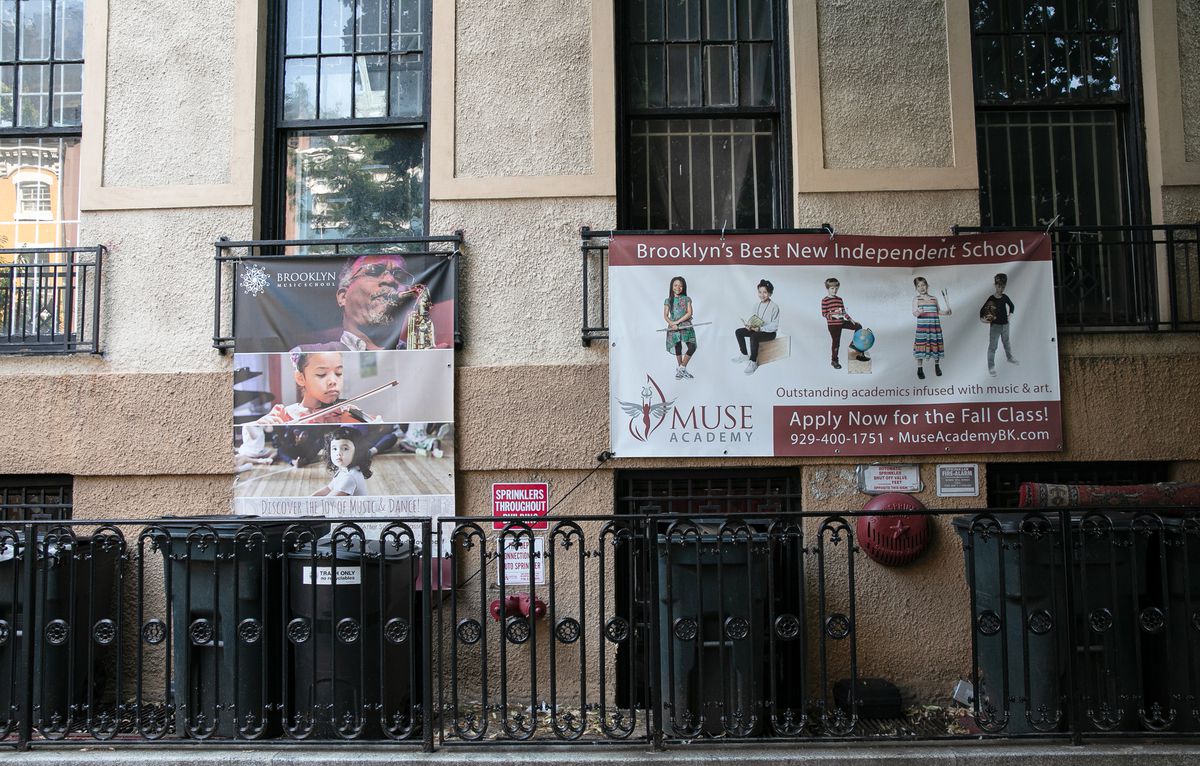 Soft piano music and kids’ voices drift out open windows of the Brooklyn Music School in Fort Greene onto a tree-lined street, but behind the placid exterior, a battle is raging over the soul of the 112-year-old institution.

On one side, angry parents and staffers say the music school’s board — led by a polarizing finance veteran — is undermining it from within and abandoning a longstanding commitment to prioritizing needy kids by starting and promoting a competing private school in the same building.

On the other side, board members insist they’re securing the future of an institution that’s long struggled to find steady financial footing, calling critics short-sighted and territorial.

The fight features allegations of deception, mismanagement and racism: Multiple employees have accused the former board chair of attempting to screen Black music school students out of a photoshoot to promote the fledgling private school — an allegation he strongly denies. The fracas has even bled over into a contentious real estate development planned for the empty lot next door.

The board’s critics say they’re ultimately fighting for something deeper.

“Brooklyn Music School is an institution in Fort Greene that has always been about the people of Fort Greene,” even as the neighborhood gentrified and many were pushed into central Brooklyn, said one former employee who spoke on the condition of anonymity for fear of retaliation.

“There’s a really big fear that that heritage is going to be lost.”

The music school has occupied a tan stucco building behind the renowned Brooklyn Academy of Music for over a century, but the current conflict traces back to 2016 and a controversial proposal.

After several lean years and the recent departure of a private school that was renting vacant classroom space during the school day, BMS was looking for ways to shore up revenue.

They said they were tired of sharing space with outside schools, and suggested BMS could fill its revenue gaps by doubling down on lessons and outreach. They argued that starting a new private school was fundamentally different than renting space to an existing one — and would pull the school away from its original mission.

“A private school with a $22K price tag is not consistent with the ‘affordable to a wide range of students’ stated in our mission,” 35 faculty members wrote in a 2017 letter.

The parent of a BMS student, Coulson joined the board several years earlier eager to make his mark. He got intimately involved in daily operations — more than past board members.

“Half the pages of their website (were) broken, they hadn’t raised and substantial money in a decade, the facility was in poor shape,” Coulson recalled.

But some staffers felt Coulson’s hard-charging style clashed with the laid-back community vibe of the school.

“It got to the point where it just felt very micro-managey,” said Tanasia Swift, the former director of BMS’s afterschool program. “He was the very opposite of that family-oriented situation…he’d come in and not say ‘hi,’” she added.

Another former employee who left the school because of what they called “board mismanagement” was more blunt. “Crocker really was all about absolute control,” the employee said. “He wanted power over everything that happened in the school.”

Concerns about Coulson heightened when staffers read accounts about how he installed spyware on his ex-wife’s iPhone during a bitter divorce.

Dozens of staffers called for his removal. The board voted to strip him of his chair position but allowed him to remain on.

Tensions over the private school proposal and Coulson’s conduct came to a climax during a 2017 photoshoot for promotional materials for the new private school.

Coulson organized the shoot, brought his own photographer, and asked BMS workers to enlist students from the music school’s afterschool program to pose as models.

Two former BMS staffers who were there said it became clear Coulson was not satisfied with the racial composition of the mostly Black group of students they’d assembled.

“Some of the Black students, he’d take one or two photos and send them on the way,” she recalled.

Swift hit her breaking point when a young Black boy, who had excitedly dressed up for the event, was dismissed after just a few shots.

“That student was super excited, he was dressed up… the same treatment wasn’t given to him,” Swift said. “I began to feel really distraught and was crying.” Swift, who is Black, left her job at the school several months later.

Coulson vehemently denied giving those instructions, and said the photographer actually spent more time with Black students. He acknowledged he asked for a racially diverse group and said he was disappointed they couldn’t find more Asian students. Coulson said he never told anyone to pull out Black kids.

He pointed out the photographer took dozens of photos of Black students and that MUSE’s website depicts a racially-diverse group. A banner from the shoot hangs outside the school — three of the five students are white.

To staffers, the debacle felt like confirmation that “all these new systems and improvements and forward-facing promotions… were all geared towards white families,” Swift said.

MUSE head of school Deborah Bradley-Kramer said they have never removed instruments and that MUSE was less intrusive than previous private schools.

The racial and socioeconomic differences between the schools underscore the divisions.

Coulson said MUSE, where one of his children attends school, “very much shares the ethos of inclusiveness.”

He defended MUSE’s presence in the building, arguing the private school “has not placed any constraints on any tangible BMS programming,” and noting its rental income helped BMS stay afloat when it was largely shuttered during the pandemic.

But BMS parents and staffers said they never trusted the school’s board because six members of BMS’s board have simultaneously served on MUSE’s board, including Coulson, who was on both executive committees at the same time.

In a scathing 2019 email obtained by The News, long-time BMS finance manager Ed Morrill wrote he was “concerned that his [Coulson’s] presence on The BMS Executive committee – and – the MUSE executive committee makes a big conflict of interest flag… In short, there is no one looking out for the best interests of BMS.”

BMS board members defended the “interlocking” boards structure, noting it’s a common practice in the non-profit sector. Green, who has chaired the BMS board since Coulson lost the role in 2019, said she told the heads of both schools “BMS programs and success were to have priority” in any space negotiations.

But even as tensions crested over space and resources in BMS’s existing building, another battle was brewing over its future home.

BMS’s board had been planning a deal for years with Gotham, a real estate developer, to secure two floors of new space for the music school in a 24-story tower slated for the vacant lot next to the school building.

When Bradley-Kramer told prospective MUSE parents in April the school “will occupy two floors of the new facility,” and that the new development could “accommodate growth of MUSE through 12th grade,” it infuriated BMS parents and staff worried MUSE was going to worm its way into BMS’s expansion.

BMS’s board tried to quell fears by passing a resolution promising not to rent space to MUSE in the new building. The board also resolved to recuse Green and Coulson, the last two remaining members sitting on the BMS and MUSE boards, from any votes involving both entities.

Critics say it’s not enough, arguing the board can vote to reverse its recent resolutions at any time. Parents are instead asking for a clause in the deed and zoning resolutions forbidding any rental to entities competing with BMS or private schools.