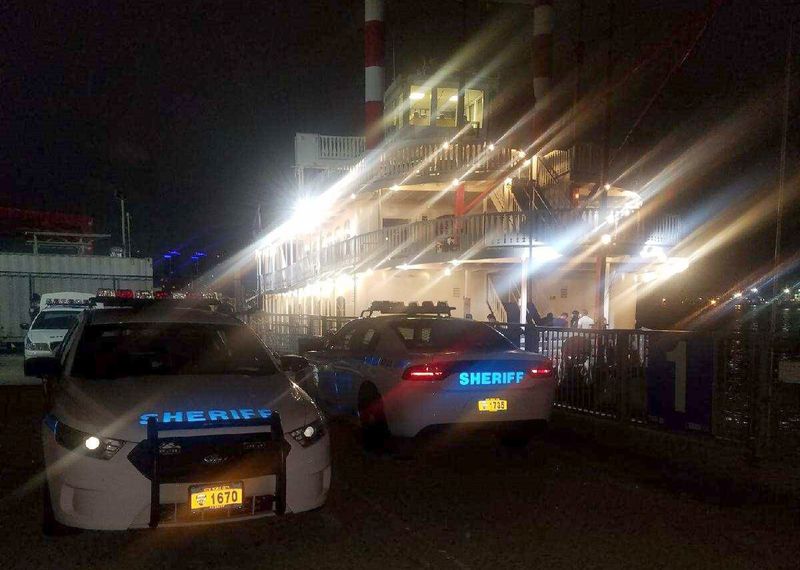 The captain and owners of a popular Manhattan party boat were arrested for defying coronavirus social distancing mandates and going for a crowded booze cruise, officials said Sunday.

The Liberty Belle, a four-story river boat that can hold up to 600 people, had just returned to Pier 36 in Lower Manhattan about 11:30 p.m. Saturday when officers from the New York City Sheriff’s department broke up the 1920-themed party and made arrests.

Officers arrested the boat’s owners in charge of the party, Ronny Vargas and Alex Sauzo, and gave them desk appearance tickets to appear in court at a later date.

They also arrested the captain, Joseph Spadaro of Staten Island, and issued him a summons, according to the Sheriff’s department.

The party set sail around 8:30 p.m. with over 170 revelers on board, many of whom excitedly posted pictures and videos of their onboard exploits to social media as they swilled Budweisers and Moët champagne.

“So a packed Liberty Belle party boat just departed from Pier 36 on the LES waterfront with no apparent social distancing or mask requirement,” an alarmed local group, The Resident Association of The Two Bridges Waterfront Tower, tweeted along with a pic of the boat with two crowded decks. “Who has jurisdiction over these floating nightclubs?”

Pictures and videos shared by Instagram influencer Ivana Kordic show dozens of partygoers dancing the night away with no face masks or social distancing despite signs on the boat warning people to stay six feet apart.

A woman with the Instagram handle @svanukka, who called the cruise “surreal,” posted a video of herself on the boat captioned, “Me being absolutely unreasonably awkward but my city and the music being absolutely reasonably perfect.”

The New York City Sheriff’s department said they waited for the boat to return to Pier 36 after being tipped off by office of Manhattan Borough President Gale Brewer.

Disciplinary actions or fines for the owners of the boat will be decided at their court date; the boat’s captain was allowed to return the boat to its mooring place at Atlantic Basin in Red Hook, officials said.

“I don’t know what happened — he just called me and said he got in trouble,” she said.

Suazo, who lives in Floral Park, L.I., couldn’t be reached for comment.

“He’s a nice guy,” said neighbor Justin Wasserman, 20, who was surprised to hear of the arrest. “When he first moved in he would talk about his business. I wouldn’t have expected it.”

Along with defying social distancing guidelines, officers found liquor had been served on board despite the boat not having an active liquor license, officials said.

The boat is operated by and leased out through Empire Cruises, a party boat service based out of Skyport Marina on the F.D.R. Drive. Company officials did not immediately respond to a request for comment.

State law updated June 26 requires that boats carrying passengers maintain a distance of six feet apart or masks must be on at all times to prevent the spread of coronavirus.

“No more than the maximum number of people who can safely maintain an appropriate social distance of six feet, inclusive of both crew and passengers, unless all are members of the same household,” said the state law. “If such distance cannot be maintained, acceptable face coverings must be worn at all times by all individuals on the vessel.”