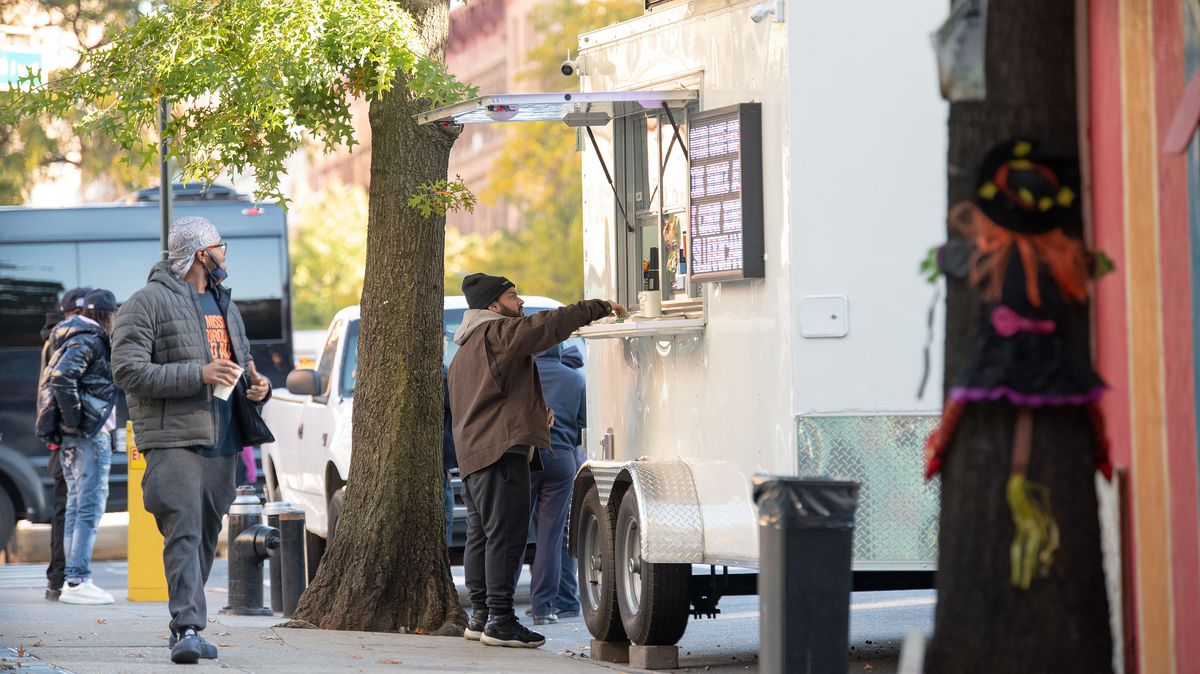 Welcome to Uncle Budd’s, where business is smoking — and the cops don’t mind.

Customers pop in daily between noon and 11 p.m. for an assortment of edibles, pre-rolled joints and sealed bags of pot dubbed “Scottie Pippin” and “Purple Haze.”

It’s a different world for weed sellers just a decade after more than 50,000 marijuana busts under the Bloomberg administration in 2011 — with more than 90% involving people of color, advocates say.

Display jars of pot sit behind the truck’s clerk, offering an array of options that also include marijuana-infused gummy worms, since the operation launched two months ago.

“I 100% condone what they’re doing,” said a 23-year-old local restaurant host and customer. “It’s legit now. If the government makes money off it, so can people of color … And everyone who’s in jail for marijuana right now should be free.”

There’s nothing surreptitious about the new business: The truck sits in plain sight beneath a flashing LED sign reading “Uncle Budd’s.” The operation never missed a beat when two teens were recently wounded in a shooting across the street at a fried chicken joint.

Or when city cops, in a random vehicle checkpoint, stopped cars about 20 feet away.

Or even when election night supporters of incoming Manhattan District Attorney Alvin Bragg partied only a few feet away inside the Harlem Tavern.

The legal dodge employed by ownership is simple: The buyer isn’t making a purchase, just providing the seller with a “donation.” And the seller isn’t peddling pot, but merely offering the customer a gift in return for their generosity.

“We’re doing all right,” said one of truck’s mellow salespeople over the hum of a generator that keeps the lights on. All the weed sellers are Black and live in the neighborhood, and most of the financial backers are Black as well.

“There’s a big gray zone there now,” said Stanley Cohen, a well-known marijuana attorney. “The state is in a bit of a bind. They reduced all the criminal sanctions in New York as part of this step toward legalizing as part of a plan to generate tax revenue … There’s this whole marriage between criminal law and civil sanctions that has to happen.”

He expects that will take another six months to a year. And in the meantime?

“You have spots in Harlem, in Park Slope, in Queens and elsewhere with entrepreneurs saying this stuff is quasi-legal, as long as I only keep a certain amount of it onsite,” said Cohen. “If I make $1,000 a day, there’s a living in it.”

A 33-year-old Harlem construction worker, one of the regulars at Uncle Budd’s, said the time for change in policing the marijuana trade was long overdue.

“This is the very thing that we (once) went to jail for,” he said. “So it’s time for us to profit. Why not put the people who have been doing it all along in a position to do it legally? It’s only fair.”

Weed enforcement in recent months is basically an afterthought for the NYPD as police battle a pandemic surge in crimes like robbery and felonious assault, according to Robert Gangi, head of the Police Reform Organizing Committee.

“We’ve been back monitoring court arraignments since July and we haven’t seen one marijuana arrest,” said Gangi. “Cops have clearly been told one way or another not to make those kind of arrests anymore.”

A Manhattan-based NYPD sergeant said the rank and file was awaiting some sort of official policy regarding marijuana busts as the pendulum swings in favor of sellers and smokers.

“We haven’t gotten any guidance,” he said. “Where I work, I smell marijuana all day, every day. If I saw that, the first thing I would do is call the legal bureau to cover my ass.”

Photographer and activist John Penley, who ran a small East Village pot delivery service back in the ‘80s, said operations like Uncle Budd’s provided a template for the immediate future of city marijuana outlets.

“They’ll be a truck in every neighborhood in the city,” he declared. “That truck is a whole new angle. The state is not really speeding up the process. It’s ridiculous to have it legalized, but they are not making any tax money off of it.”

The construction worker, after making his purchase and sharing his thoughts, declined to give a reporter his name.