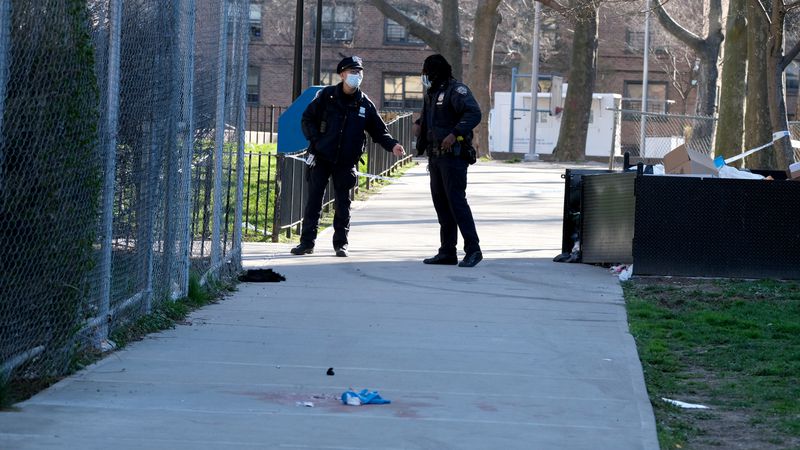 A Brooklyn ex-con armed with two pistols fatally shot his girlfriend and two of her relatives, including a teen, before running off and killing himself, police said Tuesday.

The gunman’s brave 9-year-old daughter, who hid when the fatal shots were fired, alerted police to the horror when she called 911 from the blood-soaked home 11:22 p.m. Monday, cops said.

The 46-year-old gunman, identified by police sources as Joseph McCrimons, opened fire during a fight with his girlfriend in an apartment inside the Van Dyke Houses in Brownsville. It was not immediately clear what sparked the argument.

“I heard pops and screaming,” said one neighbor who wished not to be named. “I heard arguments. I thought it was a fight.”

When police arrived at the Sutter Ave. apartment in they found McCrimons’ 45-year-old girlfriend, a 20-year-old woman and a 16-year-old girl sprawled on the floor dead.

The gunman’s young daughter was also in the home, rattled but unharmed, cops said.

It appears all three victims are members of the same family, police said.Their names were not immediately released.

“It’s just a terrible situation all the way around,” Shea said on NY1. “An individual goes into the home with at least two firearms. We have three women who are shot and killed.”

“There was a child in the residence and we were just reviewing some of the body worn camera (footage) of the cops coming into that location who encounter that child,” Shea added. “It’s just a terrible, terrible situation.”

As cops responded to the shooting, police got another 911 call and responded to a scene two blocks away at Mother Gaston Blvd. near Dumont Ave. At that scene they found McCrimmons dead from a gunshot wound to his head in a walkway outside another Van Dyke Houses building.

A .38-caliber handgun was near his body, police said, and a second gun was also on him.

The gunman’s suicide was caught on video, Shea said.

The neighbor said she had heard screams from the apartment where the shooting took place before.

“I’ve always heard them arguing and screaming, yelling at the kid sometimes,” she said. “There’s a lot of violence…banging walls, screaming.”

McCrimmon was arrested on Nov. 16, 1993 for a fatal shooting in Nassau County on Halloween night, according to court records. He was convicted of manslaughter in 1995 and served eight years in prison before being released in February 2003.

When reached, a woman who identified herself as McCrimmons’ aunt said she had heard about the murder/suicide, but did not want to talk about it.

“I don’t know anything about it, bye” the woman said before hanging up.