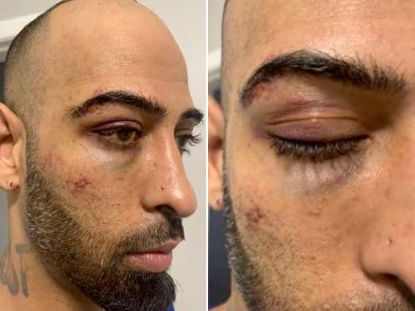 A driver who led police on a white-knuckle high-speed chase through Brooklyn was beaten unconscious by angry cops when he finally pulled over and was dragged out of his car, a lawsuit filed against the city charges.

The chilling chase and beatdown unfolded after Naveed Azam, 35, picked up his brother and a friend from a Gravesend restaurant Sept. 12 and an unmarked car began following them, Azam told the reporters. Cops wrongly suspected they were involved in a shooting, according to his suit.

Azam said he didn’t know he was being tailed by cops and sped away from the mystery pursuer in his Hyundai Sonata. When more vehicles, using sirens, joined the chase, he realized it was the NYPD after him, he said, but he kept driving to look for a public place to park.

“I kept on driving because I was scared,” he told The News.

The chase began around Avenue V and W. Ninth St. and ended 7 miles later on Hamilton Ave. in Red Hook, where Azam finally stopped the car.

Seven NYPD cops were eventually involved in the pursuit and arrest, according to the suit, which accuses the NYPD of false arrest, excessive force, malicious prosecution and violation of Azam’s constitutional right to due process, among other allegations. It was filed last week in Brooklyn Federal Court.

Azam told The News he had kept his hands up as soon as he pulled over on what he said turned out to be a mistaken pursuit.

“I didn’t want to put my hands down to open the door,” he said. “They had to break the door handle.”

That’s when Police Officers Ronald Louie and Stephen Tartar and five other unnamed cops grabbed him out of his vehicle and kicked and punched Azam until he passed out, the suit alleges.

“They pushed me to the ground face-first. The cop kicked me, another cop punched me telling me, ‘Where the guns at?’ After that I fell unconscious,” Azam said. “I was not being aggressive. I had my hands up the whole way.”

While he was unconscious, Azam alleges cops told his brother they believed the trio had been involved in a shooting and that “You’re lucky we didn’t shoot you,” according to the suit filed by his lawyer Abe George, which noted the cops’ assumption was wrong.

Azam says he regained consciousness at the 60th Precinct stationhouse.

“I woke up in a holding cell screaming for help, telling them I’m bleeding,” Azam told reporters.

He was taken to a hospital, where he was treated for a cut to his eye, hospital records show.

Azam said he was hit with a slew of charges, including speeding and failure to obey a traffic signal, which he admits he did during the frenzied pursuit. A criminal complaint filed by cops alleges Azam clocked more than 100 mph during the chase.

The police also alleged Azam was “exhibiting signs of intoxication,” including slurred speech, red eyes and smelling like booze. Azam denied he was drinking, telling The News his friend in the back seat had a bottle of liquor previously bought at a liquor store.

All charges against Azam were ultimately dismissed, records show.

“I’m still having back flashes of these cops,” Azam said. “I still can’t go to sleep. I still have ringing in my ear. And I’m afraid of these cops. I haven’t been normal since.”