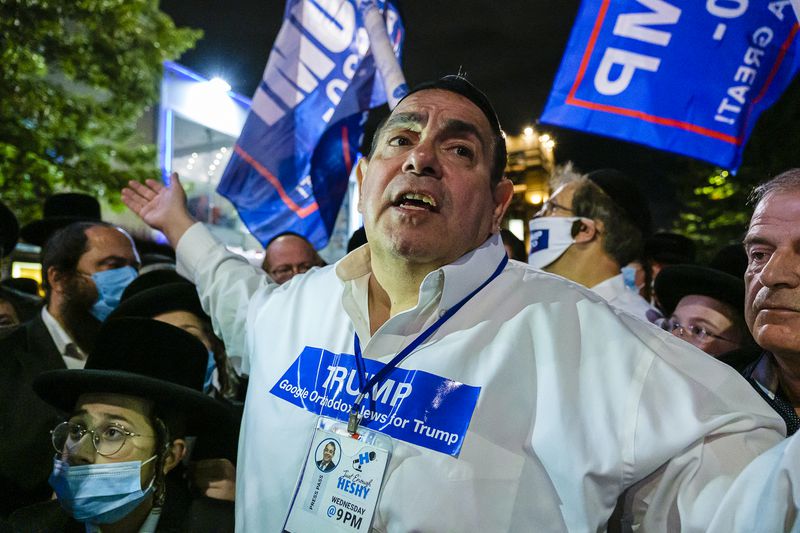 A robocall purporting to be at the behest of Donald Trump’s presidential campaign directed hundreds of Borough Park residents to take to the streets earlier this week in what became violent protests, according to the recording, which was obtained Friday by local media.

The man on the call, who uses the name Chaim Hersch Golderberger, says that people in touch with Trump’s campaign are “urging everybody to come out with signs: ‘Cuomo killed thousands.’”

“Come to 13th Avenue and hold big signs — ‘Cuomo killed thousands’ — as many as possible, as big as possible,” he continues. “The Trump campaign is urging us to hold as many and as big signs as possible. Please send this message around. Make it go viral.”

A spokeswoman for the Trump campaign, Samantha Zager, said in an email message that the campaign “had no involvement with this.” Zager attempted to go off the record, which reporters declined to do.

Gov. Cuomo slammed Trump for his campaign’s purported involvement in the situation.

After protests and rioting over the death of George Floyd swept through the city this summer, Trump has in large part staked his reelection campaign on a law-and-order platform, stoking fears among suburban voters with images of burning and looting in big cities.

Trump has also weathered criticisms that his careless rhetoric has only heightened tensions between far-right groups and leftist protesters. During his debate with Democratic nominee Joe Biden, Trump said the Proud Boys, a white nationalist group, should “stand by” rather than denouncing them.

For months, he has also lambasted liberal leaders for not doing enough to maintain order in big cities and threatened to defund several cities, including New York, for not putting an end to protests.

But the robocall is perhaps the first indication that Trump’s own campaign could actually be behind fomenting the sort of street violence he has publicly denounced.

“The more signs we have the bigger the national outcry will be tonight on 13th Avenue, or wherever else Heshy Tischler goes,” the robocaller states. “Everybody should hold a sign ‘Cuomo killed thousands.’”

Heshy Tischler, an agitator who’s running for New York City Council, was caught on camera two nights ago urging hundreds of protesters to attack Jacob Kornbluh, for being a “rat.” Kornbluh wrote on social media that he was hit in the head and kicked by the mob.

But Tischler denied the account is his. He also said he hasn’t heard the robocall, but has reached out to Trump’s campaign and hasn’t heard back.

“I left a message,” he said. “I’d love for President Trump to come to one of my rallies.”

Menashe Shapiro, a political consultant with deep ties to the Orthodox community, confirmed Friday that the robocall has been making the rounds in community WhatsApp groups.

“There are these WhatsApp groups with hundreds of people,” he said. “This was making it through these groups.”

The recent protests in Borough Park have been fueled by Gov. Cuomo’s order to shut down schools and businesses over a surge in coronavirus cases there and in other areas. The order includes a provision to limit the number of people who can attend services in houses or worship.

For months, Trump has advocated a much laxer approach when it comes to the coronavirus and has argued that such closures are bad for the economy. Roughly 210,000 people have died of coronavirus in the United States since March.

Trump did not immediately respond to a Tweet inquiring about whether his campaign reached out to protest organizers.