Body of Queens lawyer found badly bruised in his office 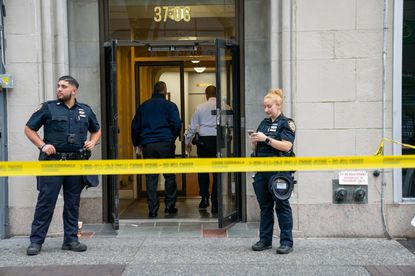 A cleaner in the building discovered the victim inside a second-floor office of the 82nd St. commercial building near 37th Ave. in Jackson Heights just before 6 a.m., according to cops. It was not immediately clear how long the man had been lying in the office before he was found.

Cops withheld his name pending notification of family members. But friends identified him as Charles Zolot, a lawyer who specialized in matrimonial cases and real estate disputes with an office in the building.

“The maintenance guy told me he came in this morning and saw a pool of blood and followed it and that’s when he found his body beaten to death,” said Horacio Navas, 70, Zolot’s friend and tailor.

Police had yet to confirm Zolot was the victim of a homicide, but the investigation appeared to be turning in that direction.

“It’s surprising. He was a good man,” the tailor said. “He was special in a lot of ways. He was introverted. Down to the way he walked was special.”

“I don’t know why anyone would want to do this to him,” he said. “The neighborhood is changing. This would never happen here [before].”

Mariana Ramírez, 75, who lives in the neighborhood, agreed.

“I’m surprised because this neighborhood is very decent. In this neighborhood, you don’t see things like this — never,” she said. “And these offices are respected, full of attorneys, reputable people.”

The commercial building was the site of a string of break-ins in 2018. The same suspect, who was caught on video, stole $500 and a laptop from two offices in the building and broke into a third.

Public records show Zolot had a trail of tax liens filed against him by the Internal Revenue Service and the state stretching back 15 years. In October, New York State filed a $46,020 tax lien against him in Queens County court.

Zolot had been slated to appear in Queens Supreme Court on Thursday for a preliminary conference for his client, records show.