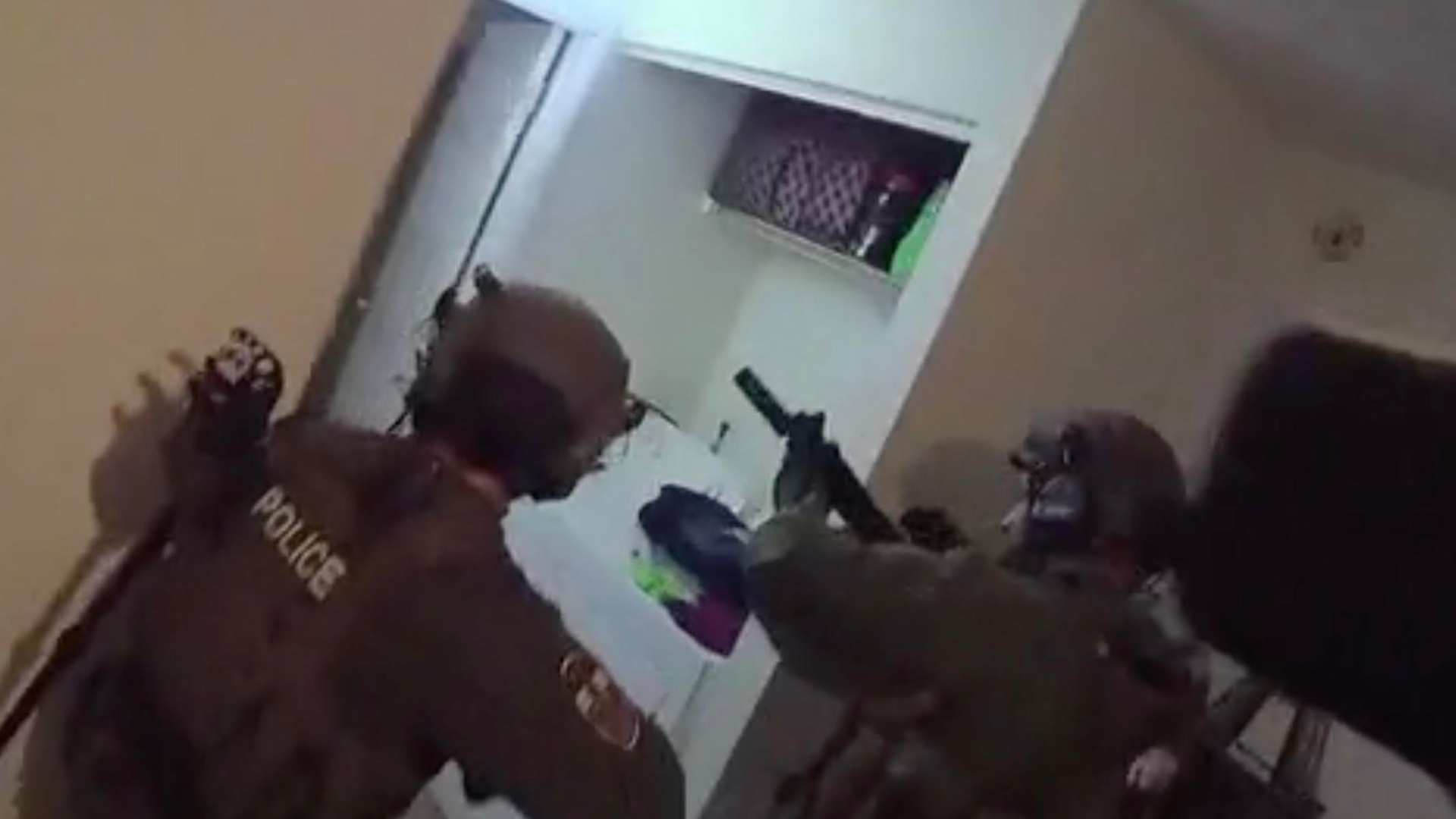 In the chilling footage reviewed by the Daily News, a Louisville Metro Police officer is seen meeting the SWAT team members outside and informing them Taylor is “down” and “dead” on the floor of her apartment.

“She’s down, but, we weren’t rushing in there to check,” the officer tells the SWAT sergeant.

The SWAT team spends the next seven minutes entering and clearing each room of Taylor’s apartment, stepping over her body, before giving the all clear for the medic to enter.

“Ma’am, can you hear us?” they shout at Taylor before checking her wrist.

“She’s done. We’ll keep one person here on her. She’s done,” one of the SWAT officers says.

In other video released by LMPD Wednesday, Taylor’s boyfriend is seen barefoot and shaken, walking backward out of the apartment with his hands up.

“What did I do?” Walker pleads, clearly distraught.

“For the rest of your f—ing life,” Hankison responds.

Audio of some of the exchanges were released last week when a judge unsealed 15 hours of grand jury recordings in the case. But the full video release gives new insight into the sheer pandemonium at the scene.

Cops have claimed they knocked three times and identified themselves before entering Taylor’s apartment.

Walker disputes that assertion in multiple statements the day of the shooting, saying he and Taylor had no idea who breached their door. The couple thought they were the victims of a home invasion before Walker fired a single warning shot with his legally owned Glock 9-mm., he claims.

In his third interview with police on March 13, Walker said the couple never heard any announcement.

“We had no dealings with the police. So if I would have heard at the door, oh, it’s the police, it changes the whole situation because there was nothing for us to be scared of,” Walker said in the redacted grand jury recordings obtained by The News.

“There’s no reason why we’d be hostile,” he said. “The only reason I had the gun out was because we didn’t know who it was.”

Kentucky Attorney General Daniel Cameron’s officer presented the police shooting case to a grand jury last month. The panel met for three days and returned only three charges of wanton endangerment against Hankison for the bullets he “blindly” fired into a neighboring white family’s apartment.

The grand jury returned no charges against Sgt. Jonathan Mattingly and Det. Myles Cosgrove, the LMPD officers who fired six and 16 bullets respectively into Taylor’s apartment.

LMPD obtained the warrant to search Taylor’s apartment as part of an investigation of her ex-boyfriend, Jamarcus Glover.

Taylor had no criminal record, and no drugs were found in her residence.

Her family received a $12 million settlement after filing a wrongful-death lawsuit against the city and police department. They have called on state officials to relaunch the investigation, claiming Cameron’s presentation to the grand jury was flawed.

In other LMPD records released Wednesday, SWAT Lt. Dale Massey described the execution of the warrant served at Taylor’s apartment as an “egregious act.”

He told investigators he and other SWAT members believed “something really bad happened.”

Taylor family attorney Sam Aguiar called the release of the video and other files “long overdue.”

“We think the public is going to understand even more so why we’re so frustrated with how this investigation went down and why there was no criminal accountability,” he told the Associated Press.