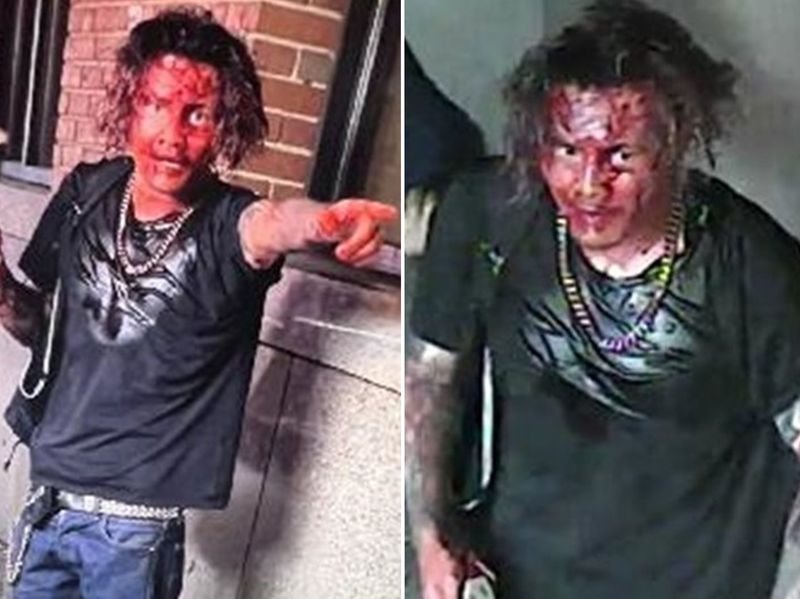 A madman grabbed a knife from an unattended food cart and slashed a homeless man in the face during a Queens clash that left the suspect covered in blood, police said Friday.

Police released the gore-soaked images of the assailant in the hopes someone recognizes him.

The 26-year-old victim was near the corner of Broadway and 73rd St. in Jackson Heights — just paces from Jackson Heights/Roosevelt Ave. train station — about 9:40 p.m. on March 18 when he began acting disorderly, according to witnesses.

The suspect stormed up and ordered him to calm down, prompting a fight, cops were told. During the brawl, the suspect grabbed a knife from an unattended Halal food cart and slashed his victim in the face.

EMS took the victim to Elmhurst Hospital where he needed 20 sutures to close the bloody gash.

A witness managed to snap a cellphone photo of the suspect before he ran off. His face and shirt was covered in his victim’s blood, but it wasn’t immediately clear if he had been stabbed or injured, cops said.

Anyone with information regarding this man’s whereabouts is urged to call NYPD Crime Stoppers at (800) 577-TIPS. All calls will be kept confidential.