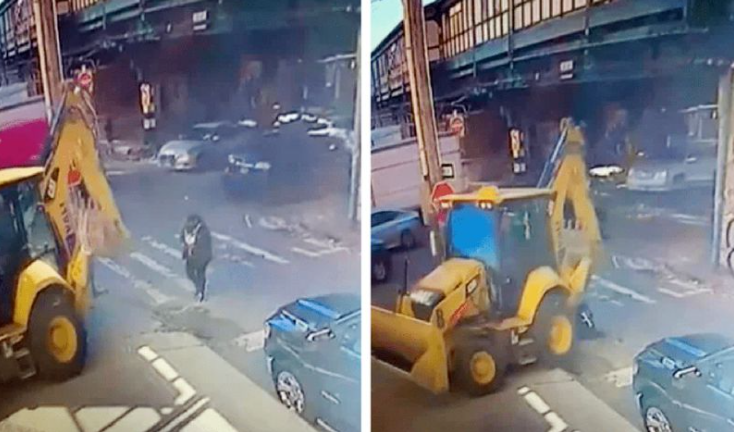 Luis Enrique Zuniga, 37, the driver of the backhoe and Justin Ostrowski, 34, the foreman on the site, were hit with manslaughter and criminally negligent homicide charges for the death of Estelle Davis, 61. The home health aide was on her way to work when she was struck by Zuniga’s backhoe on March 5, 2021, on Van Sinderen and New Lots Aves, prosecutors said.

“There are legitimate reasons why safety precautions are required at construction sites and work zones — they are meant to protect workers and the general public who traverse the area,” said Brooklyn DA Eric Gonzalez. “Safety protocols were completely ignored, and an 18,000-pound backhoe was operated dangerously on the sidewalk and in the middle of a busy intersection, leading to the tragic and needless death of a beloved woman.”

Zuniga and Ostrowski were part of a crew installing a manhole at the East New York intersection while working as a subcontractor for Con Edison.

The job site lacked simple safety measures, like orange cones and flaggers, which were present at another construction site a block away, prosecutors said.

In the 20 minutes before the crash, Zuniga backed off the sidewalk into the intersection numerous times, “narrowly missing several pedestrians and at least one vehicle,” according to prosecutors.

Around 2:20 p.m., Davis was crossing the intersection when Zuniga glanced quickly over his shoulder and backed off the sidewalk, hitting her with the backhoe’s rear bucket arm before running her over her twice, according to authorities.

Davis worked seven days a week as a nurse in Brooklyn and as a home health worker in Jamaica, Queens. She was on her way to the Brooklyn job, where she was due to work a 3 p.m. to 8 p.m. shift, when she was killed, relatives told reporters.

Earlier in life she had been a pastor and schoolteacher, according to her widower, Cleveland Thomas Jr.

“What has occurred to my wife will not go unresolved, so says so God,” said Thomas, calling Zuniga and Ostrowski’s actions an “absolute wrong.”

“I’m happy that they’re arrested and we want justice to be served in this case. We want them to be prosecuted to fullest extent of the law,” said Debra, a cousin of Davis. ”We want to see them in prison for the rest of their lives. We miss her every day.”

On top of the manslaughter and homicide charges, Zuniga was charged with leaving the scene of an accident without reporting and reckless driving, prosecutors said.

He and Ostrowski were released without bail and are due back in Brooklyn Supreme Court on April 5.

They face a maximum prison sentence of five to 15 years.

Zuniga’s attorney, Jonathan Sims, declined to comment on the case. Ostrowski’s attorney did not respond to an inquiry.