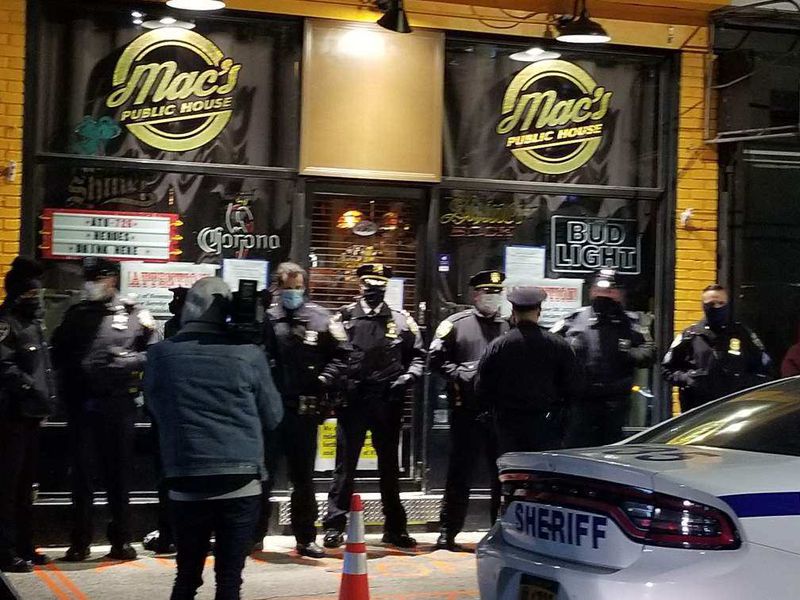 The New York City Sheriff’s Office sent undercover officers into Mac’s Public House on Lincoln Ave. in Grant City on Tuesday afternoon to find the bar, which is in Staten Island’s “orange zone,” allowing customers to eat and drink inside.

Restaurants in Staten Island’s orange zone are currently allowed to do take out only.

But the owners of Mac’s Public House openly defied the order, declaring the bar an “autonomous zone” that didn’t recognize the state’s social distancing rules.

The State Liquor Authority yanked the bar’s liquor license but the pub defiantly remained open. Over the last week, the city has received “numerous complaints for indoor dining in an Orange Zone and operating past the 10 p.m. curfew imposed by the Governor’s Executive Order,” Sheriff Joseph Fucito said.

The undercover officers were allowed to purchase food and drink for a “mandatory donation” of $40, officials said.

“Over the course of the next hour, deputy sheriffs observed multiple patrons entering and remaining in the premise,” Fucito said.

When sheriff deputies finally went in about 5:40 p.m., 14 patrons were dining inside.

Bar owner Daniel Presti was taken away in handcuffs, charged with obstruction of government administration. He was given a desk appearance ticket to appear in court at a later date.

The bar’s bartender and cook were also given violations for disregarding social distancing rules.

Video taken by the Staten Island Advance shows about 50 people outside the bar — the sidewalk outside marked off in orange paint reading “autonomous zone” — clapping for Presti as he was forced to lock up the pub for the night.

“De Blasio sucks!” one person yelled as a line of a half-dozen deputies barred anyone from going inside.

“This is communism right in front of us!” another yelled.

Fucito said none of the protesters were arrested.

“The protesters were verbal but peaceful,” Fucito said.