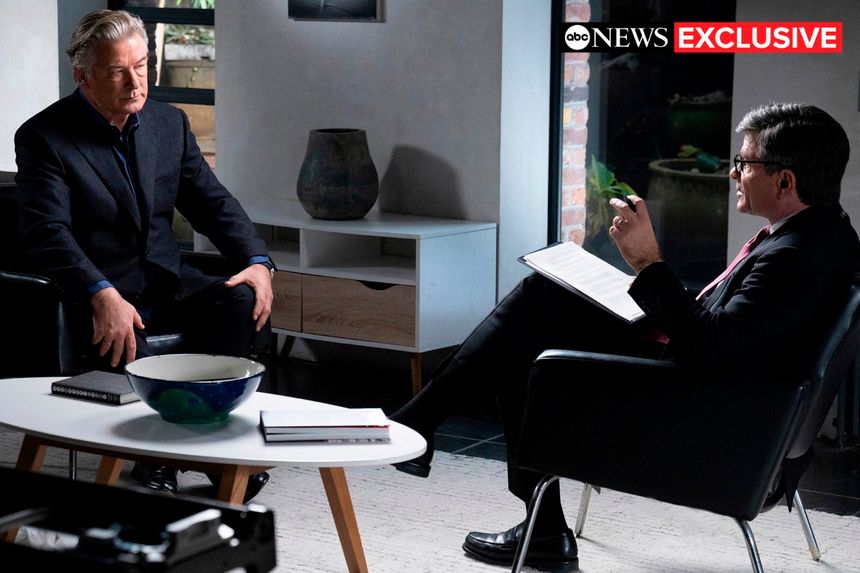 Alec Baldwin claims he didn’t pull the trigger of the gun that killed cinematographer Halyna Hutchins on the set of “Rust.”

In a clip from an interview with ABC’s George Stephanopoulos released Wednesday, the teary-eyed actor said he doesn’t know how the prop gun went off, firing the fatal bullet.

The sitdown, airing Thursday on ABC, is Baldwin’s first full interview since the Oct. 21 shooting near Santa Fe, N.M., though the “30 Rock” alum has made public comments denying all responsibility and expressing sympathy for Hutchins’ family.

More than a month later, Baldwin says he still has no idea what happened, or how live bullets ended up on set, let alone in the antique revolver his character was using in the Western flick.

“Someone put a live bullet in a gun,” he said. “A bullet that wasn’t even supposed to be on the property.”

In the 90-second clip, Baldwin did not provide any answers for how he thinks the gun was fired if he didn’t pull the trigger.

Hutchins, 42, left behind a husband and a 9-year-old son. The bullet also wounded the film’s director, Joel Souza, 48.

Baldwin said the shooting was the worst thing that’s ever happened to him.

“There are no words to convey my shock and sadness regarding the tragic accident that took the life of Halyna Hutchins, a wife, mother and deeply admired colleague of ours,” Baldwin tweeted after the shooting.

“I’m fully cooperating with the police investigation to address how this tragedy occurred and I am in touch with her husband, offering my support to him and his family. My heart is broken for her husband, their son, and all who knew and loved Halyna.”

Local authorities are still digging into how live ammo ended up in the prop gun.

A search warrant issued Tuesday by the Santa Fe County Sheriff’s Office revealed that Thell Reed, the father of “Rust” armorer Hannah Gutierrez-Reed, previously told police he had been working on another project with fellow armorer Seth Kenney earlier this year and had brought about 300 live rounds to that set. When Reed asked for the ammunition back, Kenney told him to “write it off.”

Reed believes Kenney may have brought those extra rounds to the set of “Rust.”

After the shooting, Baldwin called for police officers to be on sets with guns to monitor the weapons.

Baldwin has been named in at least one lawsuit, filed in November by script supervisor Mamie Mitchell, who claims she was injured by the live ammo.

“Alec Baldwin intentionally, without just cause or excuse, cocked and fired the loaded gun even though the upcoming scene to be filmed did not call for the cocking and firing of the firearm,” reads Mitchell’s complaint, which alleges assault and intentional infliction of emotional distress.

“Mr. Baldwin chose to play Russian roulette with a loaded gun without checking it and without having the armorer do so.”

Mitchell specifically blamed Baldwin for not checking the barrel of the gun.