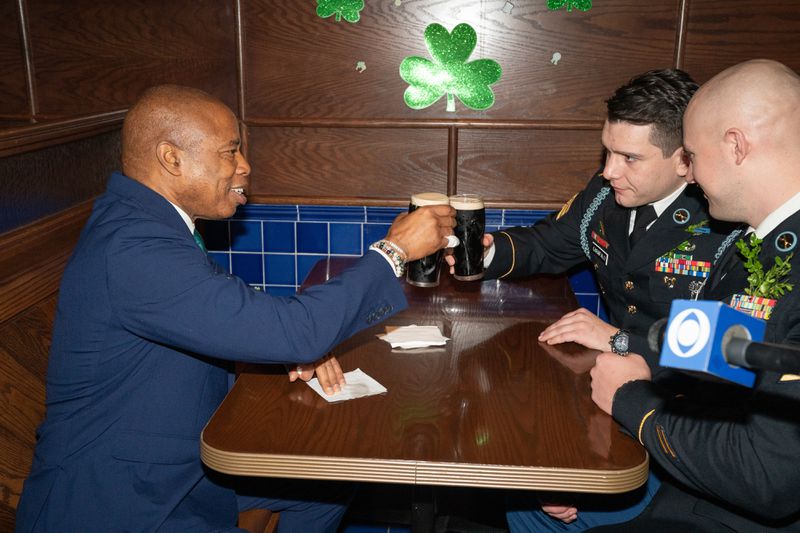 Mayor Adams sipped in St. Patrick’s Day with a beer for breakfast.

It was good, so he had another for dessert.

Hizzoner celebrated his first St. Paddy’s Day as the city’s mayor Thursday with a hectic schedule.

Before a couple of pints of Guinness, he gulped down his standard morning fare — a smoothie — then hit a couple of bars, did a radio spot and marched in the parade up Fifth Ave.

“It was excellent,” Adams said of that first pint he had at Connolly’s Pub on E. 47th St. “Right after my smoothie.”

After that, he made a stop at the Pig N Whistle across town, where he snagged a booth and chatted with a couple of soldiers as the Dropkick Murphys, and the Dubliners blared through the pub. Naturally, he couldn’t refuse that second pint.

As is customary, merriment was had Thursday. But it wasn’t without another standard attraction of the day — the politics of city life playing out in the street.

At the Pig N Whistle, Adams was greeted by Lexi Kasper, a Brooklyn woman who had a bone to pick with him.

Kasper, holding her three-year-old son Jasper, asked the mayor when he would allow children under the age of five to go unmasked in schools.

But the buzzkill didn’t end there for the mayor.

More angry parents armed with signs saying “Unmask Our Toddlers” greeted him outside the bar with jeers, demanding he drop the mandate for the kids under five.

“I got this. I’ll take care of it,” Adams said to one man yelling at him to drop the mandate while holding his 4-year-old daughter, Fia.

However, that man, Naum Goldstein of Brooklyn, didn’t seem convinced Adams would follow through.

“I have very little hope, but I hope he will still do what he says,” Goldstein said.

By the time he got to Fifth Ave. to march in the parade, the mayor appeared to slough off the encounter entirely, basking in the crowd.

Unlike his predecessor Bill de Blasio, who’d get booed regularly at parades during his eight years as mayor, Adams enjoyed a warm reception on the drizzly, cool day, drawing applause along the way.

His pick for NYPD commissioner, Keechant Sewell, got some love too.

“We love you, Commissioner Sewell,” the crowd shouted as she and the mayor marched side by side.

The shift in tone wasn’t lost on Patrick Lynch, head of the rank-and-file Police Benevolent Association.

He attributed much of it to Adams, a former NYPD captain, vocalizing his support for cops early on in his administration.

“I think City Hall and the mayor understands what New York City police officers go through now, and they’re doing the best to give support to the ladies and men that are in uniform,” Lynch said. “We need that. It’s moral support, but it’s also smart support to help us get the job done.”