A lifetime of abuse for 7-year-old Bronx girl, with step brother suspected in her brutal death 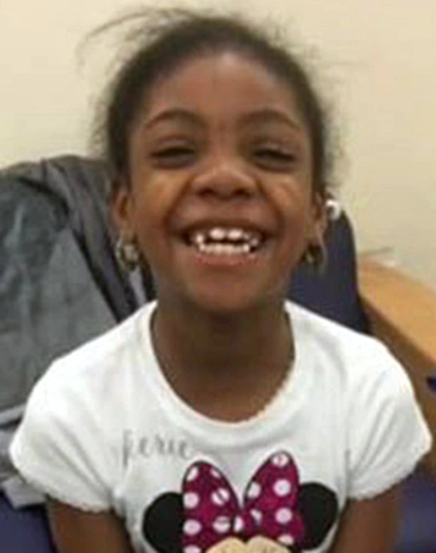 Investigators were digging Thursday into the death of little Julissia Batties, whose too-short life was riddled with abuse allegations from birth. The newborn was removed from her parents’ custody shortly after her April 26, 2014, arrival, and her teenage half-brother quickly fell under scrutiny for her shocking death, according to sources.

The little girl’s mother — who eventually won the girl’s custody despite the 2013 removal of her four older kids — and her son provided police with wildly contradictory accounts of the injuries that sent her mortally injured daughter to Lincoln Hospital early Tuesday morning.

The son, according to sources, later acknowledged punching the girl eight times — and also admitted giving her a recent black eye that mom Navasia Jones, 35, tried to cover up when questioned by the Administration for Children’s Services, sources said.

Devastated grandmother Yolanda Davis laid the blame for the little girl’s death on city agencies that failed to protect the child.

“They didn’t do their job, and that’s it,” said Davis. “(Julissia) was my girl. Everybody knows it, and I don’t know if the mother was jealous of the love between us … I did all I could to save my granddaughter.

“I went through torture to save my granddaughter, and she’s still in her grave. She was a beautiful kid, she was a quiet, humble kid.”

Julissia eventually lived with her grandmother until April 2020, at which point ACS apparently determined Jones was fit to raise the girl.

The dead girl’s father, in an interview, accused Jones of fighting dirty to deny him custody of their now-departed daughter from the start.

“She lied, and she has mental issues,” said a heartbroken Jullius Batties, 37, who also has a 2-year-old son with the mom. “I’ve been fighting her for the longest time, since Julissia was born … I wanted to take care of my daughter. I said to her, ‘If you don’t want to take care of her, give Julissia to me.’”

A hospital doctor told police the child was cold to the touch, with dilated pupils, when she arrived. Police sources reported signs of trauma to her face and the right side of her body.

Little Julissia’s short life ended less than an hour later. The cause of her death remained under investigation, with no criminal charges yet brought against anyone, authorities said.

When police responded to a Tuesday morning 911 call at the family’s Mott Haven apartment in the Mitchel Houses, medics were already fighting to revive the girl.

Jones told a nurse that she woke up around 5 a.m. Tuesday to find Julissia in the bathroom, vomiting and urinating on herself, sources said.

The half-brother provided a different account. He claimed that Julissia spent the night getting snacks from the kitchen before he discovered the little girl throwing up in her bedroom, sources said.

He first admitted slugging her twice in the face, and later told police that he punched Julissia eight times while admitting scratches found on her body were from his long nails, according to the sources.

At some point, Jones and the half-brother carried Julissia into the living room and put her on a couch where she fell asleep before the mom left with her 2-year-old son to the store and the bank, the sibling told police. Only when she returned did they notice the little girl was choking and her hands were turning white, sources quoted the brother as saying.

The 911 call wasn’t made until 8:12 a.m., more than three hours after the girl supposedly first fell ill.

According to the teen, Jones told ACS after the earlier assault that her little boy hit Julissia with a toy gun, sources said.

The mother, police sources said, also provided inconsistent accounts of what happened to the hospital nurse and detectives.

Despite the decision removing the other four children from her custody, Jones eventually won her battle to keep Julissia. ACS appealed the ruling, noting the newborn was in danger because her parents had failed “to exercise a minimum degree of care.”

The appellant panel ruled in ACS’s favor and Julissia was initially placed in the custody of her paternal grandmother — until last year.

Sources said authorities were repeatedly called to the home, with up to nine reports filed after calls with abuse allegations.

An ACS spokeswoman declined to discuss specifics of the case but said the agency was investigating along with the NYPD. Jones’ lawyer when the mom fought for custody of Julissia declined comment.