9 of Every 10 Restaurants and Bars in N.Y.C. Can’t Pay Full Rent 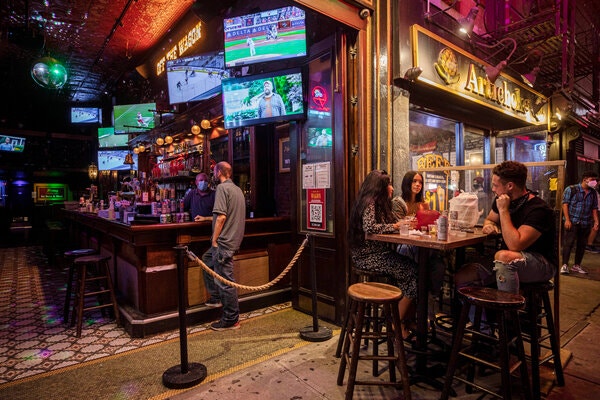 Nomad, a North African and Mediterranean restaurant in the East Village, shut down in March after the pandemic engulfed New York City, leaving its owner unable to pay the full $11,500 rent for months.

After opening for outdoor dining in June, the owner, Mehenni Zebentout, has struggled to pay 70 to 80 percent of the rent. But he had to cut his staff from nine full-time employees to four part-time workers. And his landlord still wants Mr. Zebentout to pay what he owes from the spring.

“We’re just hoping for some miracle,’’ he said. “I believe, according to my experience, two out of three restaurants will close by December, and I’ll be one of them if there’s no help from the city or the government.”

Even after the opening of outdoor dining, which was meant to provide a boost to the city’s roughly 25,000 restaurants and bars, many are still in financial free fall and closing for good.

The ongoing travails of the industry were underscored by a survey released this week by the New York City Hospitality Alliance, which found that nearly nine out of every 10 dining establishments had not paid full rent in August and that about a third had not paid any rent.

Even as the city prepares to allow indoor dining at 25 percent capacity on Sept. 30, that may not be enough to reverse the steep economic slide of one of the city’s key industries. With the lack of tourists and office workers, many restaurants, particularly in Manhattan, are on the brink of collapse, posing a big obstacle to New York’s recovery.

The 87 percent of restaurants that said they had not paid their entire August rent was an increase from the 80 percent that reported not paying all of their June rent. The survey was based on responses from 450 of the 2,500 businesses that make up the alliance’s membership.

The resumption of indoor dining at reduced capacity will allow restaurants to welcome more diners, but some owners said that would not be enough to offset the loss of outdoor dining because of cold weather or the end of the city-permitted program on Oct. 31.

Mayor Bill de Blasio said on Tuesday that there would be an announcement about the program in the coming days, though it was unclear if that meant an extension. “What makes sense?” he said to reporters. “What doesn’t make sense? How will that work?”

City Hall officials declined to provide any more details. Among other issues, regulations limit the types of heating devices that can be used to keep outdoor spaces warm.

The city should allow restaurants to use portable propane heaters, which are currently banned, said Andrew Rigie, the executive director of the hospitality alliance. He said heaters hooked up to natural gas lines were permitted but were expensive to install and required special permits.

Jack Sterne, a spokesman for Gov. Andrew M. Cuomo, said that a moratorium on evictions, which was recently extended until Oct. 20, had helped some businesses stay afloat. He said the state had also allowed bars to sell cocktails for takeout and delivery.

But he said a “data-driven reopening strategy” in allowing restaurants to increase capacity was necessary to keep infection rates low.

“This pandemic isn’t over, and everyone is trying to avoid a potential second wave that would force businesses to close down again,” he said.

Socially distanced outdoor dining brings in only a fraction of what a restaurant’s typical income might be, and many establishments were already having a hard time making a profit. Many restaurants are still trying to pay rent owed from the months when they were shut down, making it even harder to cover rent in more recent months.

Federal aid through the Paycheck Protection Program, which was meant to help preserve workers’ jobs, offset some costs, but that has mostly run out. The inability of restaurants to pay rent has also dealt a severe blow to many smaller landlords, who have their own bills to pay.

“This commercial rent crisis is not going anywhere, and it’s continuing to get worse, and we need to deal with it in a thoughtful way,” Mr. Rigie said. “Otherwise, we are going to see more defaults throughout the system and more loss of our beloved restaurants and bars and fewer jobs and opportunities for New Yorkers.”

Whether a restaurant is able to pay rent often hinges on whether landlords and tenants can make deals. About 60 percent of the businesses that responded to the alliance’s survey said that their landlords had not waived any portion of their rent.

Jay Martin, executive director of the Community Housing Improvement Program, which represents about 4,000 landlords who own rent-stabilized apartment buildings, including buildings with commercial units, said some landlords were not waiving rent because they had exhausted their ability to give people a break.

Landlords are struggling to pay mortgages and property taxes, and their income is dependent on rents’ being paid in full.

“We’re at margins that are very thin,” he said.

Others have been successful at negotiating a lower payment.

Since April, when she reached an agreement with her landlord, Lyn-Genet Recitas, 55, has been paying 30 percent of her roughly $10,000 rent for her restaurant, Lyn-Genet’s Kitchen, in the Hamilton Heights neighborhood in Manhattan. The agreement runs through January.

Outdoor dining did not provide a boost because her restaurant already had outdoor space, Ms. Recitas said, adding that business had already fallen 50 percent from what it was before the outbreak.

Now, with temperatures dropping, she is seeing even fewer diners, and limited indoor dining would not come close to making up for the losses she is sustaining.

“That percent just isn’t going to work out,” she said.

Andrew Schnipper, who owned four Schnipper’s restaurants in New York City before the start of the pandemic, said that he had since slashed his work force from about 100 employees to a dozen and closed two of his four locations, one of them permanently.

He said that he was fortunate because Schnipper’s had a robust takeout and delivery business before the pandemic and because he had received money through a government relief loan that helped him stay afloat.

Even so, his business has been down about 85 percent, and he now owes more than a quarter of a million dollars in back rent for each of his two open locations. (One of those locations is on the ground floor of the New York Times building on Eighth Avenue; the other is farther east in Midtown Manhattan).

Mr. Schnipper said that he was negotiating with the landlords at both locations.

“They seem like they’re willing to give us a break on the rent, but at the moment we don’t have an agreement that we believe realistically allows us to survive,” he said.

Mr. Schnipper said that restaurants would “go out of business in droves” without rent help from the city and state. He said that he thought reopening for indoor dining at 25 percent capacity would do little to address his shortfall, because Midtown Manhattan remained largely deserted.

“We won’t recover until there’s a vaccine, in my opinion,” Mr. Schnipper said, adding that “New York City’s going to take a while to cycle back up, and there needs to be some understanding — it’s going to be an uphill battle.”