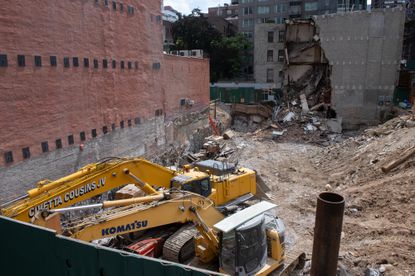 Authorities were responding to yet another partial building collapse Thursday, this time at a four-story vacant structure in Manhattan.

The FDNY was called to a vacant building at 211 East 34th Street shortly before 11 a.m. for a reported collapse on the fourth floor. Surrounding properties were evacuated as a precaution; no injuries were immediately reported.

The MTA said all lanes were open in the nearby Midtown Tunnel but traffic reaching the tunnel was affected by the response to the collapse.

No other details were immediately available.

It’s the second reported collapse in the city in 48 hours. On Tuesday, one wall of a multi-story home in Brooklyn caved into a next-door alleyway, spewing debris and causing major damage but no injuries. Nearby homes were also evacuated.

Causes of both collapses remain under investigation.