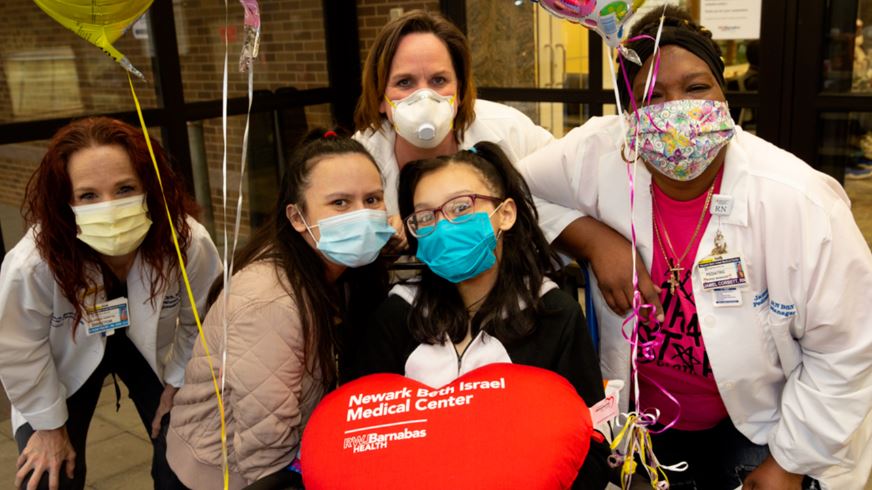 A 12-year-old girl thanked the medical team in Newark that saved her life after she almost died from a blood clot that may have been caused by COVID-19.

Jissel Rosario was rushed to Newark Beth Israel Medical Center and Children’s Hospital of New Jersey on April 21 when her left leg became swollen and blue.

It wasn’t long after her arrival that she went into cardiac arrest from the large clots visible on her leg.

“Her leg was so swollen that it was compromising the blood supply to her leg,” said Dr. Marc Cohen, the hospital’s chairman of the Department of Medicine.

When doctors attempted to remove the clot from her leg, it moved to her lungs and caused Rosario’s heart to stop.

“We had to do life-saving CPR for almost an hour,” said Dr. Derrick McQueen, the director of Pediatric Critical Care Director. “If that had happened outside of the hospital, she would not have made it.”

For three days, Rosario stayed on a heart-lung bypass machine while a team of doctors worked on her, eventually dissolving the clot. Her heart began to work on its own, and soon, she was laughing and talking again, according the hospital’s news release. Her leg was treated using hyperbaric therapy, which helped her regain circulation, and doctors were able to save it.

Now, the big question was how she got sick — Rosario tested negative for COVID-19, but on her last day at the hospital, she tested positive for COVID-19 antibodies, and doctors now believe the teenager’s near-death experience could be related to the novel coronavirus

On Tuesday, Rosario was discharged and sent home with her family. Her recovery will include continued therapy for her left leg.

It was a joyous moment as hospital staff gave her a salute as she left the building.

“Being able to save her life and get her back on her feet, was a very gratifying experience,” Cohen said.