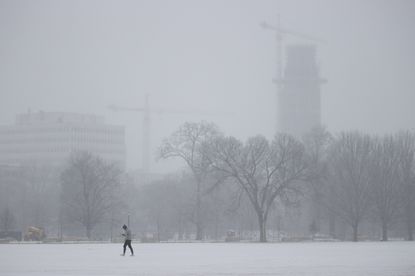 Winter Storm Uri has left at least one person dead and several more injured as it continues an unrelenting assault on parts of Texas and Louisiana. Weather.com reports that millions remain without power as temperatures drop to record levels.

A 50-year-old Louisiana man who slipped on ice and hit his head is reportedly the storm’s first confirmed weather-related death. A Texas man who opted to sleep in his van rather than going to a homeless shelter has also died. Harris County officials reportedly said the brutal conditions may have caused his death.

A half-dozen Houston residents are being treated for carbon monoxide poisoning after using a charcoal grill to warm their home, the Weather Channel said. Both of Houston’s airport closed Monday, leading to the cancellation of more than 3,800 flights, USA Today reports.

The mercury hit 6 degrees at the DFW Airport in Dallas at 7 a.m. Monday, which is 9 degrees lower than the former record set well over a hundred years ago.

According to the Texas Tribune, 2 million Texans were without electricity Monday and Dallas residents were being asked to minimize their use of power.

Knox News reports that COVID-19 testing sites have been impacted by the polar vortex, which has also effected parts of Tennessee, Alabama, Mississippi and Arkansas.