Yankees full of praise for seven-inning doubleheaders, some suggest making it a permanent addition to baseball 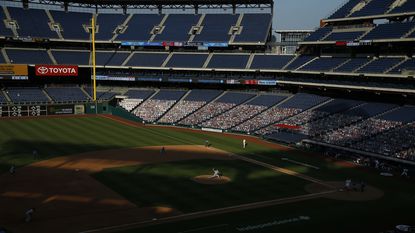 There has already been so much about the 2020 baseball season that stinks. Empty ballparks ring hollow. Fans banged drums and chanted outside the locked gates of Citizens Bank Park on Wednesday night, their noise echoing through the empty stands. The schedule is merely an outline these days. The Phillies went a week without playing baseball — unheard of in normal times — because they were exposed to the Marlins, who had a COVID-19 outbreak on their team. Travel consists of bus rides and being quarantined in hotels when not playing.

But Wednesday night, the Yankees and Phillies found a positive that baseball can take out of this year. The seven-inning games for doubleheaders took a little while to get used to, but the Yankees surprisingly endorsed the idea beyond this season.

“Obviously you can have a bullpen day like we had today, or you can have two starters potentially [have complete games],” Voit continued. “I think it’s something that pitchers like because they have a chance to throw 75-80 pitches and … every pitcher wants to go [a complete game]. But it’s different. I like it a lot. And I think it’s good for the players and injury prevention.”

Voit said he would support the idea going forward. So did Mike Tauchman, who suggested it for every Sunday and then giving teams Mondays off during a normal regular season. Both Voit and Tauchman have played extensively in the minor leagues and were used to the seven-inning games. For Yankees manager Aaron Boone it was a new experience, which he will have to repeat Saturday against the Rays.

He is not sure how much he learned from this except the urgency of scoring, Boone said.

“It all depends what you’re working with, you know what the lay of the land is not only for that day, but in the days ahead, who’s available,” Boone said of managing in a seven-inning game.  “So it’s always changing, especially in the regular season. You know, but obviously, with seven innings you got to look at it as you get to that third, fourth inning, you know that’s the fifth, sixth inning and so it’s a little bit more urgent obviously earlier in the game.”

The seven-inning games for doubleheaders was a much more well-received rule change for this coronavirus-pandemic shortened season than the extra-inning rule. This season, every half inning after the ninth (seventh in doubleheaders) begins with a runner on second base. That also is a rule that is used in the minor leagues, but has been panned by the major leaguers.

“I like real baseball,” Adam Ottavino said last month when asked about that extra-inning rule.

Both rules were implemented this season for the same reasons. MLB wants to limit the time players are at the ballpark and on the field and have a chance to be infected by the coronavirus. They also want to limit injuries in a 60-game sprint to the playoffs by a bunch of players who are used to a 162-game marathon.

But the seven-inning games for doubleheaders is something that the players can agree on. It’s possible baseball could address that in their next collective bargaining agreement.

“I’m kind of all for it. I wouldn’t be opposed to seven-inning doubleheaders every single Sunday and every single Monday off going forward,” Tauchman said.