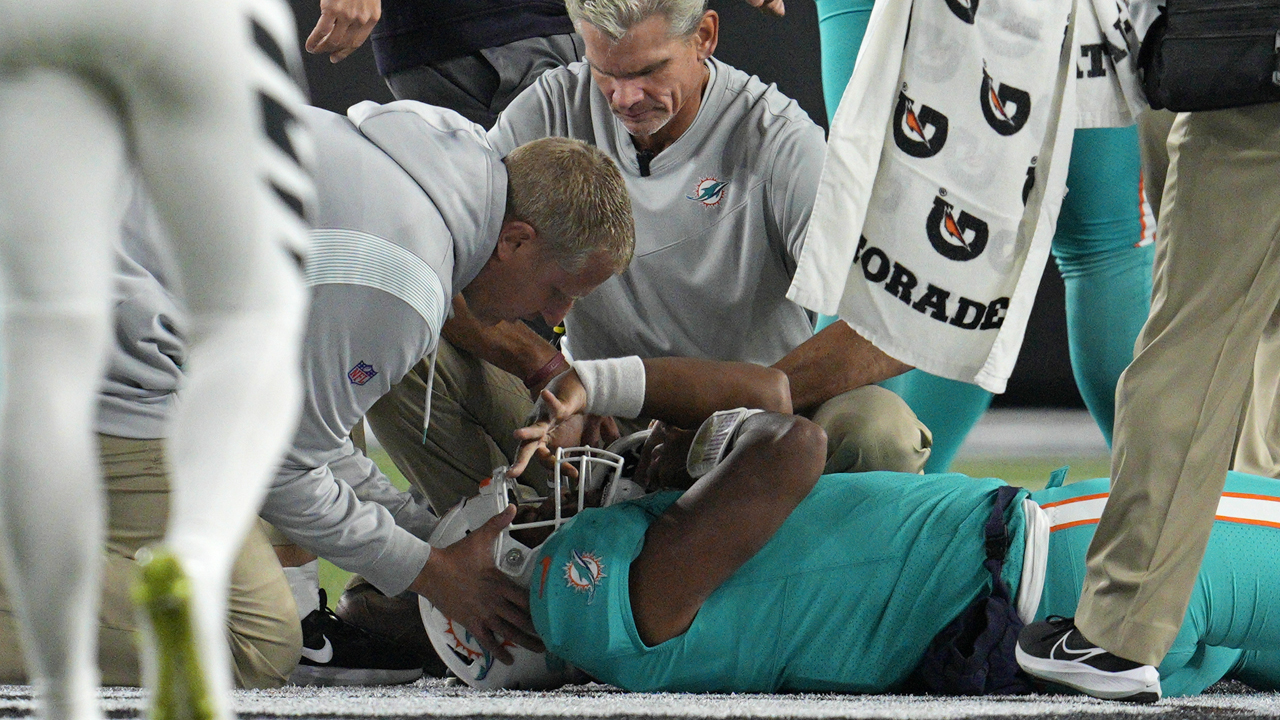 Miami Dolphins quarterback Tua Tagovailoa sustained neck and head injuries after being slammed to the ground Thursday night against the Cincinnati Bengals and was stretchered from the field.

QB Tua Tagovailoa is expected to be discharged from the University of Cincinnati Medical Center and will fly home with the team tonight.

Tagovailoa was chased down and sacked by 6-foot-3, 340-pound Josh Tupou with about six minutes left in the first half. He was spun around and thrown to the turf. While on the ground, his hands froze in front of his face. He remained down for more than seven minutes before being loaded on a backboard, stabilized and strapped to a stretcher after his facemask was removed.

Dolphins players gathered around as Tagovailoa was rolled off the field and the crowd chanted “Tua! Tua!”

Dolphins QB Tua Tagovailoa was taken off the field on a stretcher after being sacked in the second quarter vs. the Bengals. pic.twitter.com/zvTGQThsZe

Miami coach Mike McDaniel said Tagovailoa called for him when he went down.

“I could tell it wasn’t the same guy that I was used to seeing,” McDaniel said. “It was a scary moment. He was evaluated for a concussion. He’s in the concussion protocol, but he’s being discharged.

“It’s an emotional moment. It’s not a part of the deal you sign up for. His teammates and myself were very concerned, but he got checked out and it’s nothing more serious than a concussion.”

Mike McDaniel explains why Tua was cleared to play. Says he got all checkups, including independent doctor clearing. They didn’t misreport injury.

“We don’t mess with that. Never have. As long as I’m the head coach that’ll never be an issue you guys will have to worry about.” pic.twitter.com/TjTcIPWLFF

Teddy Bridgewater, who replaced the injured Tagovailoa, said the Miami sideline went quiet when the starting QB was on the turf.

“Complete silence,” Bridgewater said. “He’s one of us. At the end of the day, it’s only a football game. In that moment, you saw how we feel about Tua. He’s our captain. He’s our leader. It was great to see the doctors handling the situation.”

Bengals coach Zac Taylor had an emotional reaction to Tagovailoa going down, saying: “It’s a heavy moment. You hate to see that happen. It’s a tough moment for everybody.”

“Praying for you Tua,” Wilson wrote.