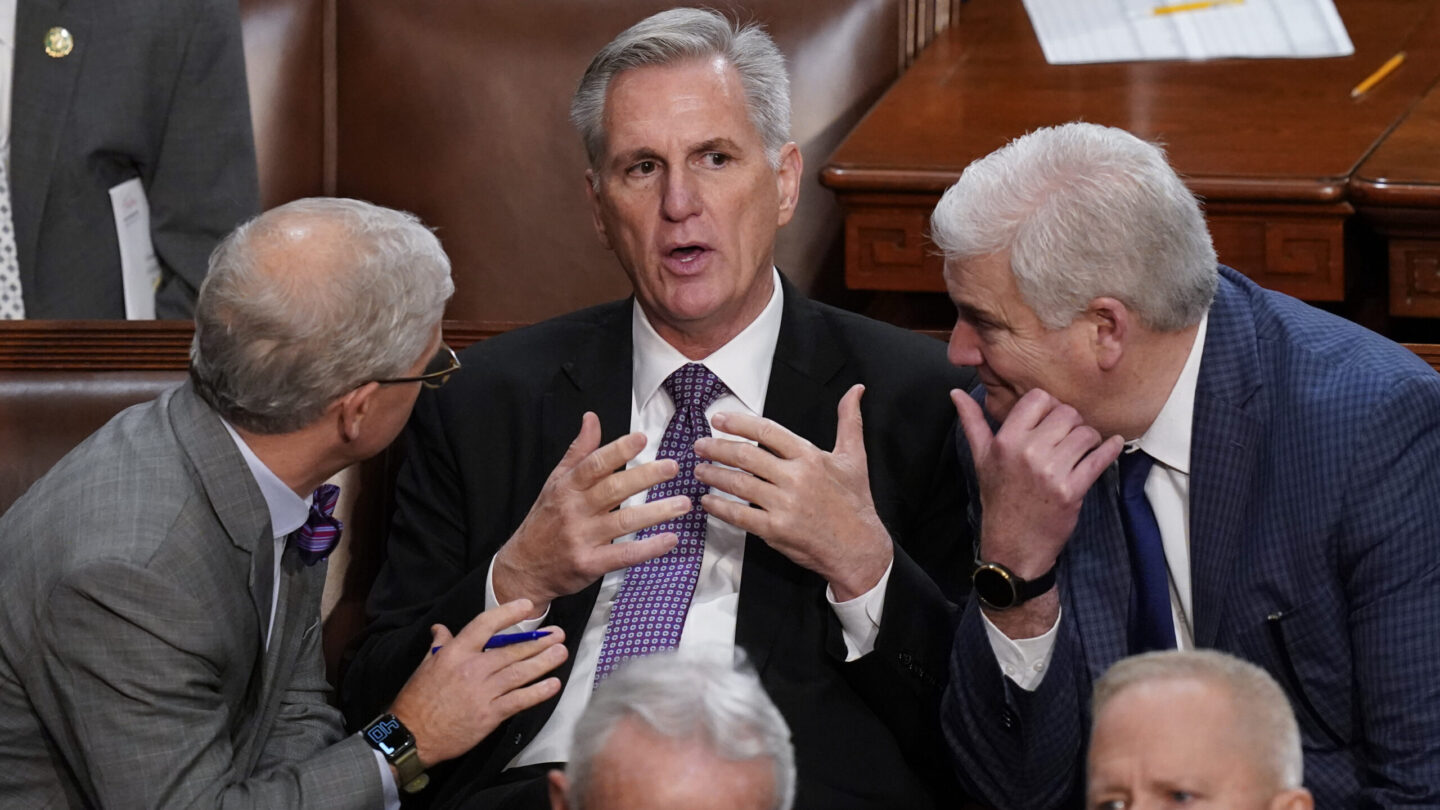 House Republicans are at a crossroads as leader Kevin McCarthy has failed over and over again to become House speaker, but he remains determined to persuade enough right-flank holdouts to vote for him and end a stalemate with no end in sight.

What started as a political novelty, the first time in 100 years a nominee has not won the gavel on the first vote, has devolved into a bitter Republican Party feud and deepening potential crisis.

McCarthy is under growing pressure from restless Republicans, and Democrats, to find the votes he needs or step aside, so the House can open fully and get on with the business of governing. His right-flank detractors appear intent on waiting him out, as long as it takes.

“No deal yet,” McCarthy said late Wednesday before the House abruptly adjourned. “But a lot of progress.”

“Members cannot be sworn into Congress because we don’t have a Speaker of the House. The House cannot even consider legislation… We do not have a functioning Congress at this point heading into a third day.” @rachelvscott joins us after the House votes to adjourn until tomorrow. pic.twitter.com/gBhevICLYE

The House, which is one-half of Congress, is essentially at a standstill as McCarthy has failed, one vote after another, to win the speaker’s gavel in a grueling spectacle for all the world to see. The ballots have produced almost the same outcome, 20 conservative holdouts still refusing to support him and leaving him far short of the 218 typically needed to win the gavel.

In fact, McCarthy saw his support slipping to 201, as one fellow Republican switched to vote simply present.

“I think people need to work a little more,” McCarthy said Wednesday as they prepared to adjourn for the night. “I don’t think a vote tonight would make any difference. But a vote in the future could.”

When the House resumes at noon Thursday it could be a long day. The new Republican majority was not expected to be in session on Friday, which is the anniversary of the Jan. 6, 2021, attack on the Capitol. A prolonged and divisive speaker’s fight would almost certainly underscore the fragility of American democracy after the attempted insurrection two years ago.

“All who serve in the House share a responsibility to bring dignity to this body,” California Democrat Nancy Pelosi, the former speaker, said in a tweet.

Pelosi also said the Republicans’ “cavalier attitude in electing a Speaker is frivolous, disrespectful and unworthy of this institution. We must open the House and proceed with the People’s work.”

Some Republicans appear to be growing uneasy with way the House Republicans have taken charge after the midterm election only to see the chamber upended over the speaker’s race in their first days in the new majority.

Colorado Republican Ken Buck said he did not encourage McCarthy to step aside. “I told him he needs to figure out how to make a deal to move forward,” he said.

The California Republican, however, vowed to fight to the finish for the speaker’s job in a battle that had thrown the new majority into tumult for the first days of the new Congress.

The right-flank conservatives, led by the Freedom Caucus and aligned with former President Donald Trump, appeared emboldened by the standoff – even though Trump publicly backed McCarthy,

“This is actually an invigorating day for America,” said Florida Republican Byron Donalds, who was nominated three times by his conservative colleagues as an alternative. “There’s a lot of members in the chamber who want to have serious conversations about how we can bring this all to a close and elect a speaker.”

Asked by @rachelvscott this afternoon if Kevin McCarthy should step aside from speaker race, GOP Rep. Byron Donalds says, “I don’t think we’re there at this point…I’m not going to speak for Kevin.” https://t.co/04QIDhWEi1 pic.twitter.com/CR00pFEu0i

The disorganized start to the new Congress pointed to difficulties ahead with Republicans now in control of the House, much the way that some past Republican speakers, including John Boehner, had trouble leading a rebellious right flank. The result: government shutdowns, standoffs and Boehner’s early retirement.

A new generation of conservative Republicans, many aligned with Trump’s Make America Great Again agenda, want to upend business as usual in Washington, and were committed to stopping McCarthy’s rise without concessions to their priorities.

But even Trump’s strongest supporters disagreed on this issue. Colorado Republican Lauren Boebert, who nominated Donalds the second time, called on the former president to tell McCarthy, “Sir, you do not have the votes and it’s time to withdraw.'”

By McCarthy’s own calculation, he needs to flip about a dozen Republicans who have so far withheld their backing as he presses on for the job he has long wanted.

To win support, McCarthy has already agreed to many of the demands of Freedom Caucus members, who have been agitating for rules changes and other concessions that give rank-and-file members more influence.

And a McCarthy-aligned campaign group, the Conservative Leadership Fund, offered another concession, saying it would no longer spend money on elections “in any open-seat primaries in safe Republican districts.” The far-right lawmakers have complained that their preferred candidates for the House were being treated unfairly as the campaign fund put its resources elsewhere.

Pennsylvania Republican Scott Perry, the chairman of the Freedom Caucus, said the latest round of talks was “productive.”

“I am open to whatever will give me the power to defend my constituents against this godforsaken city,” said Texas Republican Chip Roy, another member of the conservative group.

But those opposing McCarthy do not all have the same complaints, and he may never be able to win over some of them.

“I’m ready to vote all night, all week, all month and never for that person,” said Florida Republican Matt Gaetz.

Such staunch opposition carried echoes of McCarthy’s earlier bid for the job, when he dropped out of the speaker’s race in 2015 because he could not win over conservatives.

“There’s nothing he can give me or any of our members that’s going to be a magic pill,” Norman said. “We’re here to vet a speaker. Vet the person third in line for the presidency and that’s a good thing.”

Not since 1923 had a speaker’s election gone to multiple ballots. The longest fight for the gavel started in late 1855 and dragged on for two months, with 133 ballots, during debates over slavery in the run-up to the Civil War.

Democrats enthusiastically nominated and renominated their House leader, Hakeem Jeffries, on all six ballots for speaker over the first two days. He repeatedly won the most votes overall, 212.

If McCarthy could win 213 votes, and then persuade the remaining naysayers to simply vote present, he would be able to lower the threshold required under the rules to have the majority.

It’s a strategy former House speakers, including Pelosi and Boehner, had used when they confronted opposition, winning with fewer than 218 votes.

One Republican, Victoria Spartz of Indiana, voted present on Wednesday’s rounds, but it only ended up lowering McCarthy’s total.