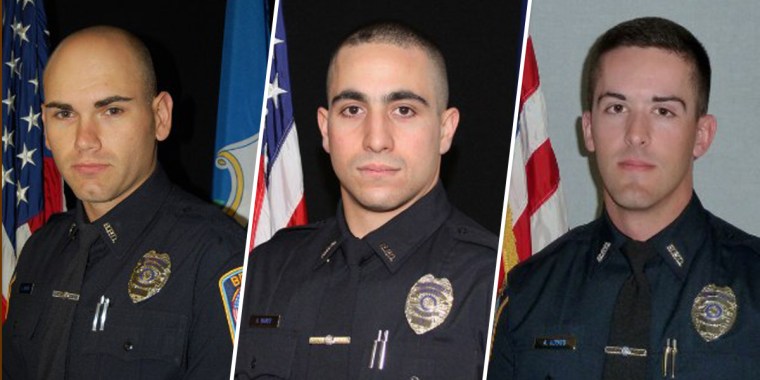 A Connecticut police officer who was wounded in an apparent ambush that killed two of his fellow officers fired the shot that killed the attacker, police said.

In a Facebook post Saturday, police in Bristol said Alec Iurato was hit by gunfire and returned fire on Wednesday, killing Nicholas Brutcher. The state medical examiner’s office said Brutcher, 35, died from a gunshot wound to the neck with spinal cord injuries.

Sgt. Dustin Demonte and Officer Alex Hamzy were gunned down outside a home where they had responded to a 911 call about possible domestic violence that authorities said appeared to be a deliberate act to lure police there.

Witnesses said they heard about 30 gunshots during the confrontation.

Iurato was released from the hospital on Thursday. Brutcher’s brother, Nathan Brutcher, was wounded in the shootout. Nathan Brutcher hasn’t been accused of playing any role in the attack.

The bodies of both officers were brought to funeral homes in separate processions Friday, as hundreds of people gathered for a candlelight vigil outside the Bristol police station. In New York, the New York Yankees held a moment of silence in the officers’ honor before Game 2 of their American League Division Series game against Cleveland at Yankee Stadium.

Police officials said all three officers were respected and had received commendations.

Demonte, 35, was a 10-year veteran officer and co-recipient of his department’s 2019 Officer of the Year award. His wife is expecting their third child.

Hamzy, 34, worked eight years for his hometown police force. Like Demonte, he was an adviser to a police cadet program.

Iurato, 26, joined the Bristol department in 2018 and has a bachelor’s degree in government, law and national security.

Nicholas Brutcher was a divorced father of two and a gun, hunting and fishing enthusiast, according to his social media pages.

In a photo posted on both brothers’ Facebook pages in 2016, Nicholas Brutcher is pointing a handgun at the camera while others, including Nathan Brutcher, are holding rifles.

Other photos show Nicholas Brutcher with a 10-point deer he shot and with fish he caught.

A fundraiser has been set to benefit Officer Hamzy and Sergeant DeMonte’s families.

To make a donation to the fund set up at Thomaston Savings Bank you may visit any branchor use this link .