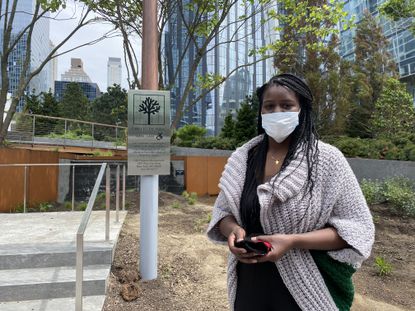 A white woman caught on video accosting a Black healthcare worker in a Manhattan park has been cleared of wrongdoing, court documents shared with the Daily News Wednesday show.

Svitlana Flom, 34, a style blogger and Hamptons restaurant owner, was seen threatening Jana’e Brown in Waterline Square on W. 59th St. in a viral video posted to the frontline worker’s Instagram in June, which has since been taken down.

The city’s Commission on Human Rights closed its case on the confrontation on Nov. 10, documents show.

In an interview in June, Brown said the troubling encounter played out as she left work to bask in the nightly applause for personnel on the front lines of the coronavirus pandemic.

Brown said Flom accused her of smoking pot, refused to drop the matter and called police multiple times. In the videos Brown posted on Instagram, a pregnant Flom was seen pleading with a 911 operator to send someone to the scene.

Brown said the confrontation felt like a repeat of what happened to Black bird-watcher Christian Cooper in his now infamous encounter with Amy Cooper, to whom he is not related, in Central Park’s The Ramble.

Flom was heard on video telling police to force Brown to delete the encounter from her phone.

“I want this video to be gone,” Flom was heard telling the 911 operator.

Flom and her husband, Gary, have been a staple at high-end social affairs over the years and were once photographed with ex-New York Knicks star Amare Stoudemire at an event.

The Ukranian-national is co-owner of Maison Vivienne, a restaurant in the Hamptons “inspired by the south of France.” A sister location on the Upper East Side shut down some time ago.

In June, Brown, who crochets hats, scarves and blankets for premature babies in her spare time, said she reported the counter in the hope Flom would grow from it.