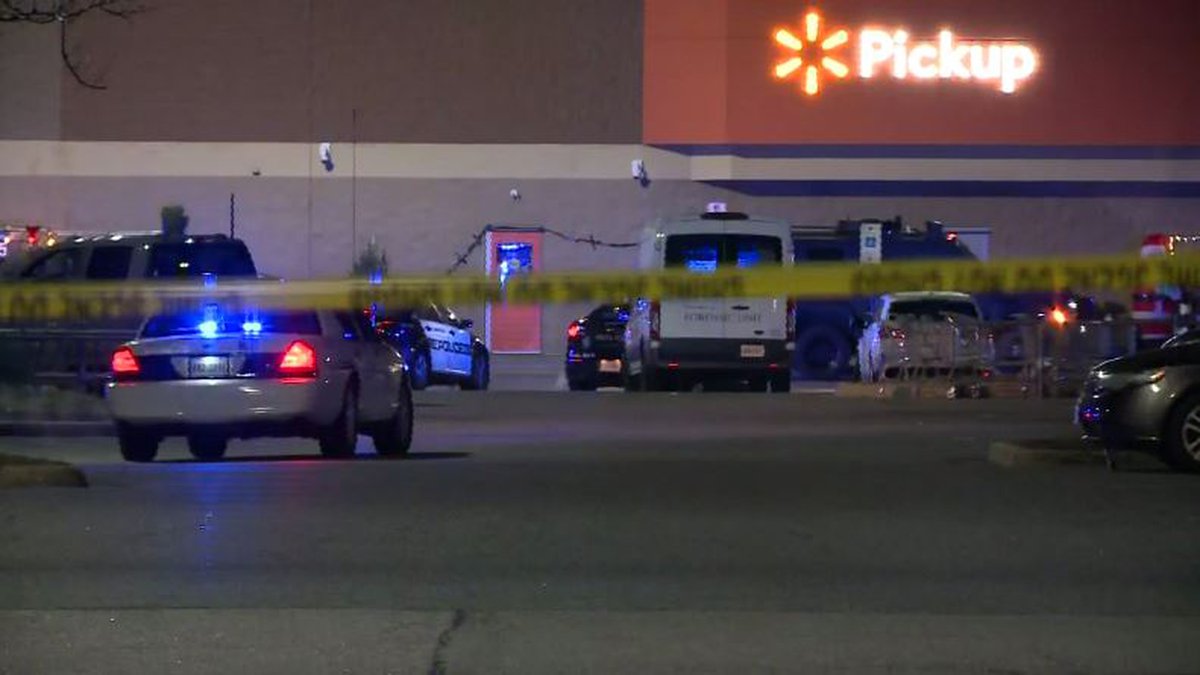 A Walmart employee opened fire at a store in Virginia, leaving six people dead, police said Wednesday, in the country’s second high-profile mass killing in a handful of days. The assailant also killed himself.

The store in Chesapeake was busy just before the shooting Tuesday night with people stocking up ahead of the Thanksgiving holiday, a shopper told a local TV station.

There was no clear motive for the shooting, which also left four people in the hospital, police chief Mark G. Solesky said. The gunman’s home was searched, but Solesky did not give his name, only saying he was a Walmart employee, because his family had not been notified.

“I am devastated by the senseless act of violence that took place late last night in our city,” Mayor Rick W. West said in a statement posted on the city’s Twitter account Wednesday. “Chesapeake is a tightknit community and we are all shaken by this news.”

Our hearts break with the community of Chesapeake this morning. I remain in contact with law enforcement officials throughout this morning and have made available any resources as this investigation moves forward. Heinous acts of violence have no place in our communities.

Joetta Jeffery told CNN that she received text messages from her mother who was inside the store when the shots were fired. Her mother, Betsy Umphlett, was not injured.

“I’m crying, I’m shaking,” Jeffery said. “I had just talked to her about buying turkeys for Thanksgiving, then this text came in.”

A database run by The Associated Press, USA Today and Northeastern University that tracks every mass killing in America going back to 2006 shows this year has been especially bad. The U.S. has now had 40 mass killings so far this year, second to the 45 that occurred for all of 2019.

The database defines a mass killing as at least four people killed, not including the killer.

The attack at the Walmart came three days after a person opened fire at a gay nightclub in Colorado, killing five people and wounding 17. Earlier in the year, the country was shaken by the deaths of 21 when a gunman stormed an elementary school in Uvalde, Texas.

Tuesday’s shooting also brought back memories of another at a Walmart in 2019, when a gunman police say was targeting Mexicans opened fire at a store in El Paso, Texas, and killed 22 people.

The shooting had apparently stopped when police arrived at the store in Chesapeake, said Officer Leo Kosinski. The city is Virginia’s second-largest and lies next to the seaside communities of Norfolk and Virginia Beach.

Mike Kafka, a spokesman for Sentara Healthcare, said in a text message that five patients from the Walmart were being treated at Norfolk General Hospital. Their conditions weren’t immediately available.

One man was seen wailing at a hospital after learning that his brother was dead, and others shrieked as they left a conference center set up as a family reunification center, The Virginian-Pilot reported.

Camille Buggs, a former Walmart employee, told the paper she went to the conference center seeking information about her former coworkers.

“You always say you don’t think it would happen in your town, in your neighborhood, in your store – in your favorite store and that’s the thing that has me shocked,” said Buggs, 58, of Chesapeake.

Walmart tweeted early Wednesday that it was “shocked at this tragic event.”

We are shocked at this tragic event at our Chesapeake, Virginia store. We’re praying for those impacted, the community and our associates. We’re working closely with law enforcement, and we are focused on supporting our associates.

“Tomorrow is Thanksgiving, one of our most cherished holidays that brings us together as Americans and as families, when we hug our loved ones and count our blessings. But because of yet another horrific and senseless act of violence, there are now even more tables across the country that will have empty seats this Thanksgiving. There are now more families who know the worst kind of loss and pain imaginable.

“Jill and I grieve for those families, for the Chesapeake community, and for the Commonwealth of Virginia, which just suffered a terrible shooting at the University of Virginia this month. We also mourn for all those across America who have lost loved ones to these tragic shootings that we must come together as a nation to stand against.

“This year, I signed the most significant gun reform in a generation, but that is not nearly enough. We must take greater action.

“We are grateful to the first responders who mobilized to assist victims, and I have directed federal officials to provide any support and assistance needed to the people of Chesapeake.”

U.S. Sen. Mark Warner said in a tweet that he was “sickened by reports of yet another mass shooting, this time at a Walmart in Chesapeake.”

Sickened by reports of yet another mass shooting, this time at a Walmart in Chesapeake. I’ll be monitoring developments closely.

In the meantime, I urge all those in the community to listen to guidance from local law enforcement and stay away from the scene.

State Sen. Louise Lucas echoed Warner’s sentiment, tweeting that she was “absolutely heartbroken that America’s latest mass shooting took place in a Walmart in my district.”

I am absolutely heartbroken that America’s latest mass shooting took place in a Walmart in my district in Chesapeake, Virginia tonight. I will not rest until we find the solutions to end this gun violence epidemic in our country that has taken so many lives.