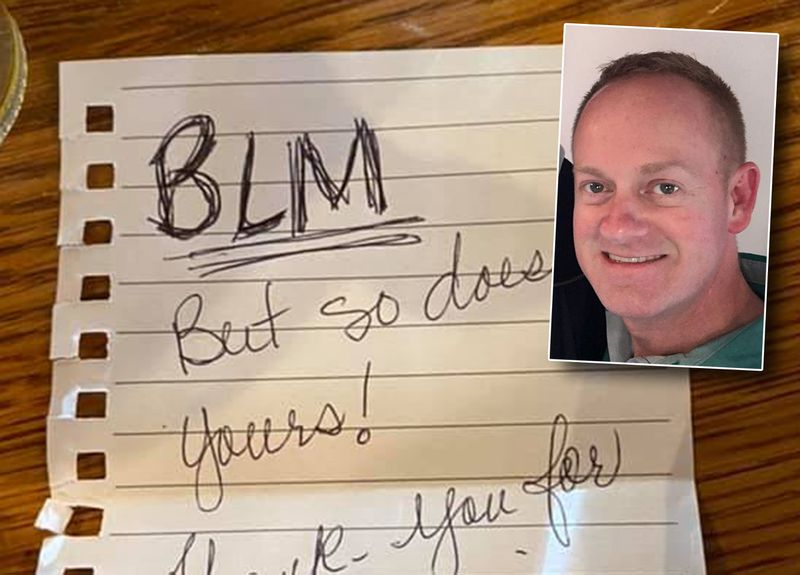 With pent-up anger spilling into the streets, touching moments between cops and African Americans in particular are welcome.

One such interaction moved a sheriff’s deputy in Nashville to share a note he got from two black women dining near him at a Cracker Barrel.

“I was told to give this to you,” the server told Sumner County Patrol Deputy Jody McDowell of Tennessee, as he told WZTV-TV. She handed him a note.

It was from two black women who had stopped by his table to chat on their way out.

“BLM, but so does yours!” read the handwritten missive, referring to the acronym for Black Lives Matter. “Thank you for your service. Breakfast paid.”

Gobsmacked and gratified, McDowell posted a photo along with his own thanks on social media. Not knowing the women’s names, he expressed his gratitude the only way he could think of.

“I want to thank the two sweet black ladies who paid for my breakfast this morning,” he wrote. “While waiting for a transport to be completed, I decided to have breakfast at a Cracker Barrel near the Nashville airport. I received this note from them.”

McDowell, who has worked for Sumner County for the past five years and spent 11 years at the Portland, Tenn., sheriff’s office, told WZTV he was especially touched given the unrest engulfing the country in the wake of several high-profile, videotaped killings of unarmed black men and women by police.