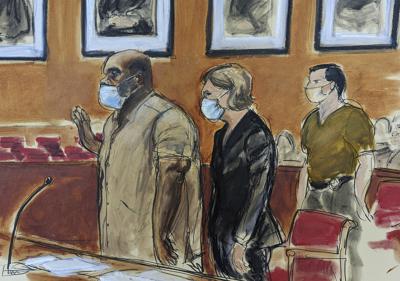 Subway shooting suspect Frank James refused to come to federal court for his 1 p.m. scheduled status conference Wednesday, prompting the judge to order the United States Marshals Service to forcibly bring him in.

“Upon the defendant’s refusal to appear before the Court when requested in connection with the above-captioned case, it is hereby: ORDERED that the United States Marshals Service, their agents, and/or designees, use all necessary force to produce the above-named defendant,” Judge William Kuntz said.

James allegedly shot 10 people on a subway train in Sunset Park, Brooklyn, April 13 before he slipped away on a different train and became the subject of a manhunt.

He has pleaded not guilty to charges of conducting a violent attack against a mass transportation system.

It comes as Eyewitness News was along for the ride Tuesday night as New York City’s top cop went underground in an effort to keep riders safe on the subway.

Police Commissioner Keechant Sewell toured the subway station where a teen was assaulted over the weekend and rode with New Yorkers who all have an opinion.

It’s been a rough two weeks in the transit system, with three murders — two in the subway and one on a bus.

The NYPD, which already flooded transit with thousands of cops since the beginning of the year, surged nearly a thousand more, focusing on 15 train lines in 20 stations citywide.