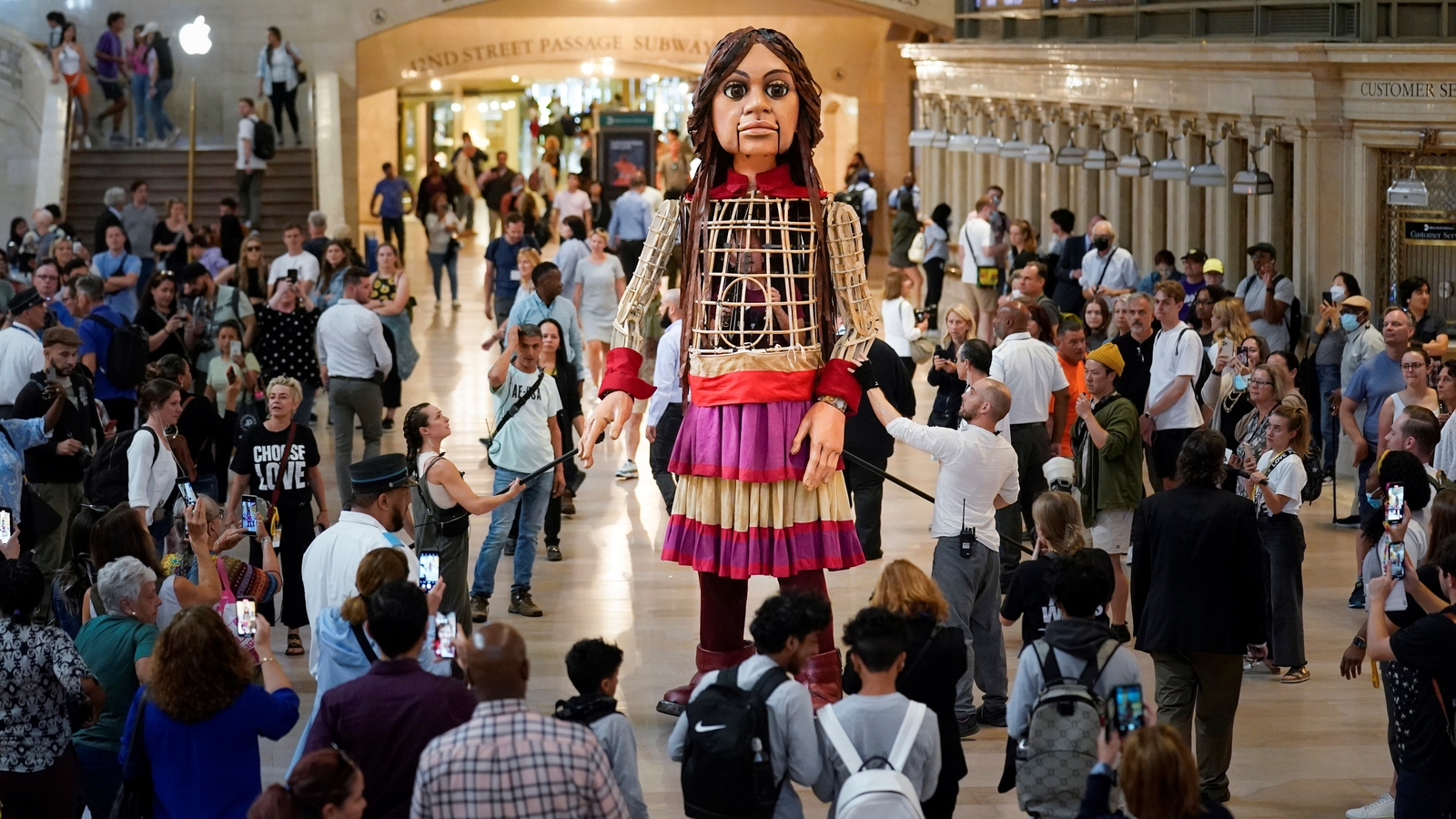 Little Amal, a 12-foot puppet of a 10-year-old Syrian refugee, is on a 17-day blitz through every corner of the Big Apple as part of a theater project hoping to raise awareness about immigration.

“When we talk about migration and refugees, we tend to forget that more than half of the people we’re talking about are children,” said playwright and director Amir Nizar Zuabi, the artistic director of Little Amal Walks NYC. “The reality is they’re children and all children are beautiful in their own special way. And I think that’s what Amal brings to the table.”

She will visit tourists meccas – Times Square, Grand Central Station, the American Museum of Natural History and Central Park, among them – and also communities far from the glitz of Manhattan, like Corona in the Queens borough and Bedford-Stuyvesant in Brooklyn.

At each of the 55 planned stops, organizers have reached out to community artists and leaders to create a special event anchored by the place visited. So Amal will join kids her age to hear a reading of the inclusive picture book “Julián Is a Mermaid” at the Brooklyn Public Library. And when she goes to Harlem she will listen to a drum circle performed by students from the Harlem School of the Arts and be accompanied by a stilt walker from Kotchenga Dance Company.

Yazmany Arboleda, a Colombian American artist who is creative producer of the New York visit, calls it one of the largest scale theatrical experiences ever built in the city.

“This is the biggest stage on Earth, and it comes from all the pluralism, of all the stories, of all the people who live here,” Arboleda said.

The puppet comes to the city after completing a 5,000-mile trek across Europe, from the Syrian-Turkish border to Manchester in northwest England. She has traveled through 12 countries – including greeting refuges from Ukraine at a Polish train station and stopping at refugee camps in Greece – and met with Pope Francis.

“New York is interesting because it is a city built from displacement, forced migration and migration,” Zuabi said. “These are the elements that created the city. And the city looms tall and has a very, very interesting engine of creativity, of innovation, of audaciousness. So bringing this project here is very interesting for us.”

During a recent rehearsal at the performing arts institution and project co-producer St. Ann’s Warehouse in Brooklyn, Zuabi stressed the core idea with his 10 puppeteers, four of which are needed to manipulate the puppet at any one time.

“She is a 10-year-old lost in the city,” he said. “Whenever you are in doubt, go back to that. She’s never safe in this city. If we understand that, I think we can make real magic.”

Some other stops for the puppet – designed and built by Handspring Puppet Company – include salsa dancing in Washington Heights, walking along the Coney Island boardwalk and listening to drummers in Jackson Heights.

At Grand Central Station on Thursday, she loomed over admiring pedestrians, who gazed up and took pictures.

“We often focus on the plight of the immigrant or the refugee, and I think what this work does is really bring our attention to the promise and the beauty,” Arboleda said. “As she walks through New York, we’re all going to be learning along.”

One of Amal’s stops will be Liberty Island, where she’ll come face-to-toe with the Statue of Liberty, who welcomes the “huddled masses yearning to breathe free.”

“The core of this project is empathy, is to fight indifference, because indifference is like a stone,” Zuabi said. “You can’t turn it. It’s what it is. The minute you start cracking indifference, something happens.”