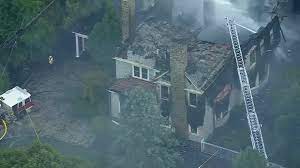 The flames broke out around 3:30 a.m. on Normandy Heights Road near Columbia Road.

Video from NewsCopter 7 showed multiple firefighting units pouring water on a large, multi-story house that had been completely gutted by flames.

It is believed the home dates back to the 1890s and the rear part of the building appeared to have collapsed.

Authorities believe that 87-year-old Robert Ricciardi and 85-year-old Gemma Ricciardi died in the fire, but the search to find them is ongoing.

“There was heroic efforts here by the police, fire, EMS, heroic efforts to try to rescue people inside that house, we are in the recovery mode right now,” the sheriff said.

The area is surrounded by more modern homes on well-manicured lawns, so neighbors are spread apart.

The cause of the fire is still under investigation.