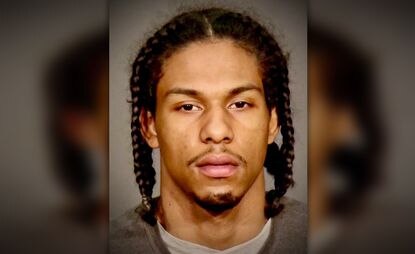 A Brooklyn man fatally stabbed steps from his home was killed by his gang-member best friend who was out on bail in a gun possession case, police sources and the victim’s family said.

“That was his best friend. But something was off with him,” Rivera’s distraught aunt, Jeanette Rivera, said of suspect Jonathan Hernandez. “I can’t believe this. Jose would bring him to our house and feed him. He gave him money. Jose would bring him in from the cold so he could get warm.”

Hernandez, 21, dressed in a black hoodie, allegedly pounced on Rivera, plunging the knife into him as pedestrians walked by and cars rolled toward them on Hart St. at Knickerbocker Ave., authorities said.

He then ran about a block to a relative’s apartment as his former pal bled to death, and called 911 to claim he was bleeding after being attacked, sources said. He had a cut on his hand, but had sliced himself during the frenzy, sources said.

Patrol officers noticed the blood trail leading to Hernandez’s location and quickly put together what had happened, the sources said.

Rivera, who was on his way home from the Bronx after visiting his 4-year-old son, had a broken bottle in his hand — but he picked it up to defend himself, his aunt said.

“He came at him with a knife. Jose was defending himself. He had to grab a bottle. What else could he do?” she said.

Jeanette Rivera said her nephew called her in a panic right before the attack.

“He started calling my phone. ‘Throw down the keys, he’s coming for me!’ Then the phone went click,” she recounted. His aunt was still at the airport, returning home from a Florida vacation.

“You see him stabbing him over and over again. He stabs him non-stop. We can’t let this guy get away with it,” Rivera’s aunt said of the video.

“Jose is someone’s son. He’s someone’s father. And he’s been murdered. Everyone in the neighborhood shot videos of it, but nobody helped him, even his friends. In this world, only your family are your friends.”

Hernandez was charged Tuesday night with murder for Rivera’s slaying. He’s a reputed member of the 9 Trey Bloods, and has a dozen prior arrests to his name, including, most notably, a Feb. 11 gun possession charge, sources said.

Police found a 9-mm firearm after getting a warrant for his Hart St. apartment, sources said. He was released on $20,000 bail Feb. 15, records show.

Rivera’s aunt said his family warned him about Hernandez. “Something was off about him. We warned him to be careful,” she said.

As for her nephew, she said, “He really helped people, especially older people. This is terrible.”